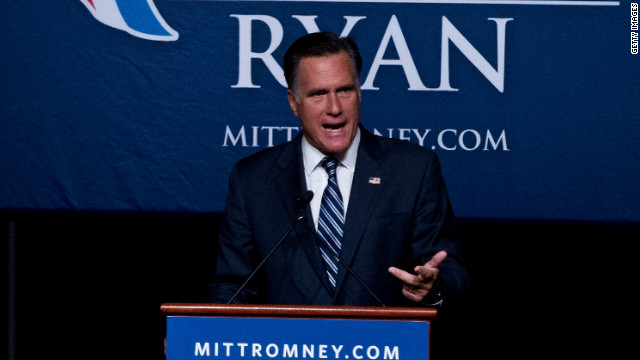 Romney sticks by his '47%' remarks, hits back

(CNN) – Mitt Romney said in an interview Tuesday that remarks he made at a fund-raiser in May casting supporters of President Barack Obama as dependent on government were an honest reflection of his campaign's message.

"This is a message I'm carrying day and day out and will carry over the coming months," Romney said on Fox News. "This is a decision about the course of America, where we're going to head. We've seen the president's policies play out over the last four years."

On Monday, secretly recorded clips of Romney speaking at a campaign fund-raiser were released on the website of the left-leaning magazine Mother Jones, including a clip of Romney characterizing supporters of Obama as dependent on government support systems.

In the interview Tuesday, Romney said he was making a political analysis in the remarks, not a broader assessment of Americans who rely on government-funded programs.

"We were of course talking about a campaign and how he is going to get close to half the vote," Romney said. "I'm going to get half the vote, I hope, I want to get 50.1% or more. Frankly we have two very different views about America."

He went on to cite an opposition-research video, released on the conservative Drudge Report website Tuesday, that shows Obama endorsing "redistribution" in 1998.

"The president's view is one of larger government," Romney said. "There's a tape that came out today where the president's saying he likes redistribution. I disagree. I think a society based upon a government centered nation where government plays a larger and larger role, redistributes money, that's the wrong course for America, that will not build a stronger America, or help people out of poverty."

Republicans began circulating the clip of Obama on Tuesday afternoon as the full 50 minute video of Romney's fund-raiser was set to release on Mother Jones' website. In the Obama video, the future president is heard speaking at Loyola University in 1998 about making government more effective.

"I think the trick is how do we structure government systems that pool resources and hence facilitate some redistribution, because I actually believe in redistribution, at least at a certain level, to make sure that everybody's got a shot," Obama is heard saying.

Ben LaBolt, a spokesman for the Obama campaign, responded in a statement which cited figures from the 2008 campaign, "The Romney campaign is so desperate to change the subject that they've gone back to the failed playbook co-authored by Sarah Palin and Joe the Plumber.

"Fourteen years ago, then-Senator Obama was making an argument for a more efficient, more effective government – specifically citing city government agencies that he didn't think were working effectively," LaBolt continued. "He believed then, and believes now, that there are steps we can take to promote opportunity and ensure that all Americans have a fair shot if they work hard. Unlike Governor Romney, he doesn't believe that if you're a student who applies for a loan you're looking for a handout."

In his interview Tuesday, Romney framed Obama's remarks as an endorsement of redistributing private wealth, rather than on making sure government agencies were well supported.

"I believe the right course for America is one where government steps in to help those that are in need, we're a compassionate people, but then we get people to build their own lives, creates their enterprises, we believe in free people and free enterprise, not redistribution," Romney said. "The right course for America is to create growth, create wealth, not redistribute wealth."