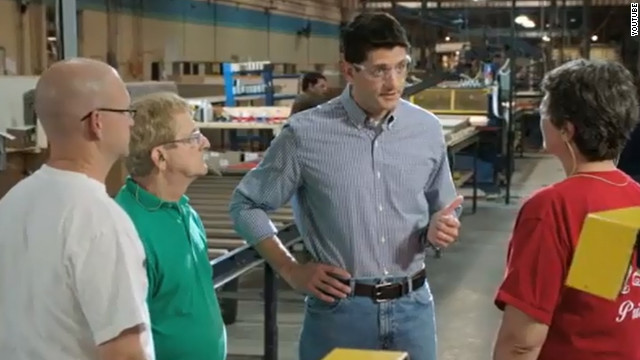 The ad, which CNN reported last week would air in Milwaukee and Madison, features Ryan speaking to a group of factory workers. One asks, "What can be done to create good jobs?"

"First, we need to end the growing government control over the economy, and when we put higher tax rates on American job creators than our foreign competitors do, we push jobs overseas," Ryan, wearing plastic safety goggles, tell her. "We need to fix that and make our tax code fair, simple, and more competitive. We should balance the budget and eliminate ridiculous regulations that cost you money. With the right solutions, we can get this economy growing."

Still in his goggles, Ryan gives his legally mandated disclosure: "I'm Paul Ryan and I approve this message."

Ryan has represented Wisconsin's first congressional district, which is located in the southeast part of the state, for seven terms. He won 68% of the vote in his 2010 re-election.

Wisconsin law allows Ryan to run for vice president and his House seat at the same time, but if he wins both contests he can only serve one office.

Then-Sen. Joe Biden of Delaware was in a similar situation in 2008. He was on the Democratic ticket as then Sen. Barack Obama's running mate, and he also ran for re-election to a seventh term in the Senate. Biden won both races, and resigned his Senate seat to serve as vice president.

Biden did run one commercial as he cruised to re-election. It was a minute long spot that went up in late October 2008, just before the election.