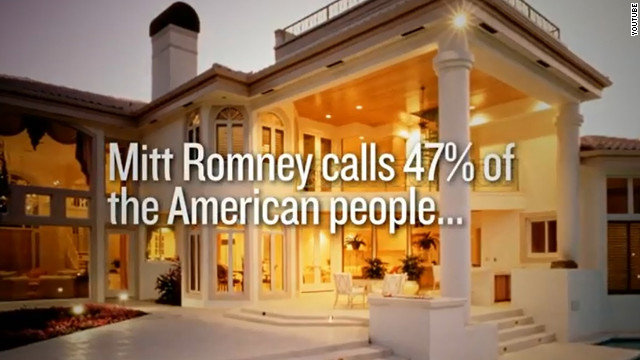 (CNN) – Priorities USA, the super PAC pushing for President Barack Obama's re-election, is using clips of a secretly recorded Mitt Romney fund-raiser in a new television ad to characterize the GOP presidential nominee as out of touch with Americans' economic struggles.

The group said Wednesday the commercial would air in Colorado, Florida, Iowa, Ohio, Virginia and Wisconsin, all battlegrounds that Obama won in the 2008 election and hopes to take again in November.

The spot begins with a narrator setting up the clips of Romney, which were secretly recorded in May and this week were posted on the website of the liberal magazine Mother Jones.

Over a photo of a mansion, a narrator says, "Behind these doors Mitt Romney calls half the American people…"

Romney's own voice takes over, saying "…dependent upon government, who believe they are victims."

"Victims?" the narrator asks incredulously. A midsized suburban home pops on screen, and the narrator continues, "Behind these doors, middle-class families struggle. And Romney will make things even tougher. Raising taxes by up to $2,000 to give multi-millionaires a $250,000 tax break."

Romney's voice comes on again, saying at the fund-raiser, "I'll never convince them they should take personal responsibility."

The narrator concludes, "And Mitt Romney will never convince us he's on our side."

In the clips, Romney is heard making the prediction that nearly half of Americans will vote for Obama because they rely on government support. They were recorded at a May 17 event in Boca Raton, Florida, at the home of Sun Capital executive Marc Leder.

The person responsible for the material said he or she wishes to remain anonymous for "professional reasons and to avoid a lawsuit," according to the Huffington Post, which also published the tapes.

In an interview Tuesday, Romney stood by his words, saying they accurately reflected his campaign's message.

"This is a message I'm carrying day in and day out and will carry over the coming months," Romney said on Fox News. "This is a decision about the course of America, where we're going to head."

"This week we learned that Mitt Romney will not stand up for students, veterans, seniors and hardworking Americans looking to make ends meet," Bill Burton, a co-founder of Priorities USA Action, wrote in a statement accompanying the ad's release. "Mitt Romney's plan to raise taxes on the middle class would stall economic growth and while protecting the safety net for the wealthiest like himself. We cannot move forward if we do not put the middle class first."

In August, Priorities announced they were shifting from their previous strategy of focusing on Romney's career at the private equity firm Bain Capital to a new effort casting Romney's policy proposals as bad for the middle class. The group says they'll spend a total of $30 million to run ads as part of this new effort, which includes Wednesday's commercial.

Priorities spent $20 million on a project attacking Romney's business career, including in a much-maligned spot that linked Romney to the death of a coal worker's wife. The coal worker, Joe Soptic, worked at a plant that closed after being acquired by Bain Capital. That ad never ran as a paid spot on television, aside from an airing resulting from a station error, though it did run frequently on cable news programs as part of news coverage of the presidential campaign.