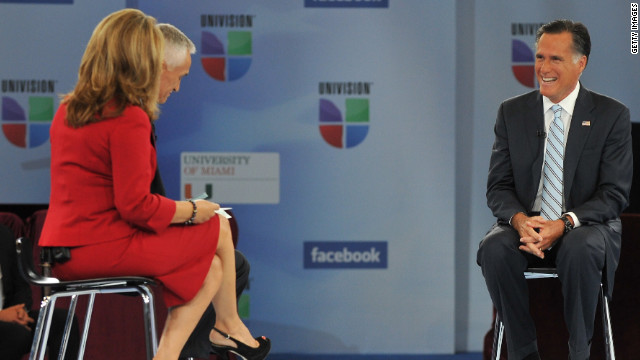 Miami (CNN) – Mitt Romney renewed his outreach to Latino voters Wednesday in a wide-ranging and, at times, pointed Q&A session, declaring he would be president for “the 100%” as he sought to regain his footing in the race to the White House.

The Republican presidential hopeful began his week with a speech to Hispanic business leaders, but a spate of secretly-filmed clips of Romney were released in the hours that followed and quickly overshadowed his remarks

One snippet of video from a May fund-raiser showed Romney joking about how being Latino might have aided him in his bid.

Romney repeated that joke Wednesday in a Univision forum, where the hosts also pressed him on immigration policy and his support for “self-deportation” during the primaries.

Telling hosts Jorge Ramos and Maria Elena Salinas he had “demonstrated my capacity to help the 100%” – a clear reference to another fund-raiser snippet in which Romney said 47% of voters were unlikely to support him – Romney promised to tackle the issue of illegal immigration. He said he was not in favor of “a mass deportation effort rounding up 12 million people and kicking them out of the country.”

“I believe people make their own choices as to whether they want to go home and that's what I mean by self-deportation,” Romney said to cheers from a largely supportive audience. “People decide if they want to go back to the country of their origin and get in line legally to be able to come to this country.”

As he did in his Monday address to Hispanic leaders, Romney took aim at President Barack Obama for failing to pass comprehensive immigration reform during his first term. Romney did not lay out his own policy proposal, but mentioned a plan by Republican Sen. Marco Rubio of Florida and said Democrats and Republicans would need to work together to come to a solution.

The event was peppered with references to Romney’s stance on issues during the bitterly-fought Republican contests, when some political analysts warned he could alienate the growing Hispanic demographic by being drawn to the right on immigration issues.

And when one audience questioner asked Romney about Obama’s health care plan, he vowed to repeal it but acknowledged his history on the issue was complicated.

“I have experience in health care reform. Now and then the president says I’m the grandfather of Obamacare. I don’t think he meant that as a compliment, but I’ll take it,” Romney said, adding, “during my primary, we thought it might not be helpful.”

The former Massachusetts governor also was questioned about his support for same-sex relationships and how he would react if he discovered one of his sons were gay.

“Well, my kids are all married, so I’d be surprised,” he said, to laughter from the audience. “But I have grandchildren. And I love my children and I love my grandchildren, and I, of course, would want them to be happy.”

He reiterated his view of marriage as a union between a man and a woman, but asserted: “individuals should be able to pursue a relationship of love and respect and raise a family as they would choose.”

Romney did receive immediate criticism online during the forum, however, for once referring to people in the country illegally as “illegal aliens.”