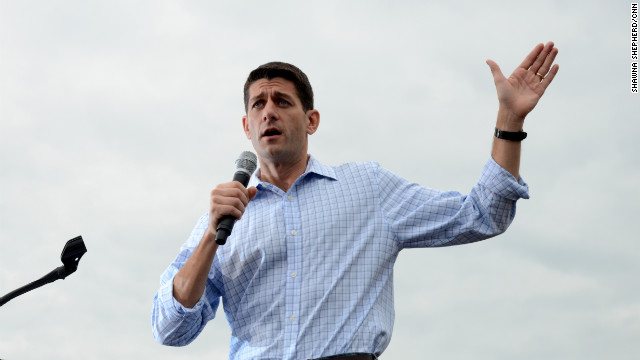 Ryan counters on the trail in Virginia

"President [Barack] Obama said that he believes in redistribution. Mitt Romney and I are not running to redistribute the wealth. Mitt Romney and I are running to help Americans create wealth. Efforts that promote hard work and personal responsibility over government dependency are what have made this economy the envy of the world," the vice presidential candidate said in Virginia.

Ryan did not explain to the crowd that the claim is based on a 1998 recording of Obama that the campaign and fellow Republicans are aggressively promoting in an effort to blunt criticism about Romney's secretly recorded remarks at a fund-raiser in May.

The clip features the future president who was an Illinois state senator at the time discussing what he calls a "propaganda campaign" against government funded entities, and suggesting better ways to make government more effective.

The Romney campaign, meanwhile, is trying to get beyond their presidential nominee's self-described "inelegantly stated" comments from the fund-raiser, which Ryan described as "obviously inarticulate" in a recent interview, and focus instead on the message he was trying to convey that people have become too dependent upon government under Obama.

As Ryan and his fellow Republicans reinforced this new line of attack Romney's running mate accused the president of trying to distract voters.

"He's out of ideas and that is why he has knocked this campaign down to a campaign of distraction, of distortion, to try and knock you off-center so that you'll just vote for the lesser of two evils," Ryan said of Obama. He's going to try and distract and divide this country to win by default."

The stakes are high for the dueling presidential campaigns as they clamor for support in critical battleground states.

Ryan has spent more time campaigning in Virginia since he joined the Republican ticket. The vice presidential hopeful held his 10th event Wednesday on the southern border in Danville, which Obama claimed in 2008 with 59% of the vote.

Obama's re-election team is hoping to win the Commonwealth's 13 electoral votes again in November. Obama and Vice President Joe Biden have campaigned aggressively in the state.

At Ryan's rally with more than 500 people at Piedmont Precision Machine Company local officials were quick to point out that when Biden visited Danville, on August 14, he got confused and said he was in North Carolina.

There was no mention of the "back in chains" remark that Obama's running mate made on that same trip regarding Romney's policies on Wall Street reform.

In the afternoon Ryan flew to Washington, D.C. and visited a victory office in Northern Virginia. He met with 25-30 people selected by the campaign based on who made the more phone calls and knocked on the most doors.

CNN's Peter Hamby reported the Republican Party of Virginia and the Romney campaign have made more voter contacts this year than during the entire 2008 and 2009 election cycles combined, according to a Virginia GOP source who did not want to be named discussing internal strategy.