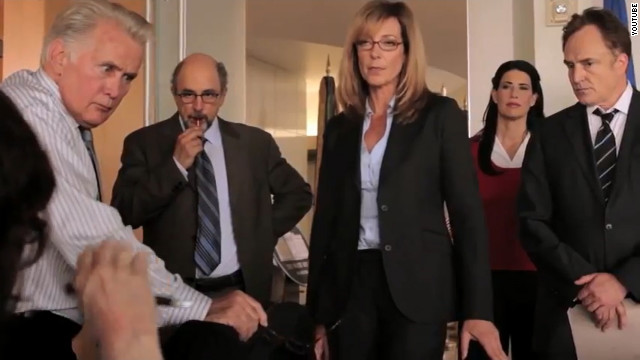 (CNN) - A candidate for Michigan's Supreme Court is getting a little help from "The West Wing"… television show.

Bridget Mary McCormack, whose sister Mary McCormack played deputy national security adviser Kate Harper on NBC's television series "The West Wing," is on the ballot this fall in Michigan as a nonpartisan candidate for the state's Supreme Court.

Her campaign "The Bridget Mary McCormack for Justice Campaign" has paid for a YouTube video that has the show's cast reprising their roles as West Wing problem solvers focusing on the thorny issue of the nonpartisan section of the ballot, and one particular cast member's sister who happens to be on it.

Hoping to boost November turnout for candidate McCormack and to drive general nonpartisan ballot voting awareness, the "West Wing" star and her former cast mates shot two versions of the four minute video which taps into several quintessential moments from the hit show. One version focuses strictly on promoting nonpartisan ballot awareness and the other also advocates for McCormack.

According to the Detroit Free Press, the campaign does not plan to air the video as a paid advertisement.

"All it would take really is a gentle reminder for people to look for the nonpartisan section on their ballot and go vote there. I was thinking we'd make a video," says Allison Janney playing White House Press Secretary C.J. Cregg.

"Read the message boards," he retorts.

OK, well, fans of the show will like it.

Absent from the reunion are John Spencer (Leo McGarry), who died in 2005, and Dulé Hill (Charlie Young), who according to Mary McCormack's official Twitter feed was out of town during filming.