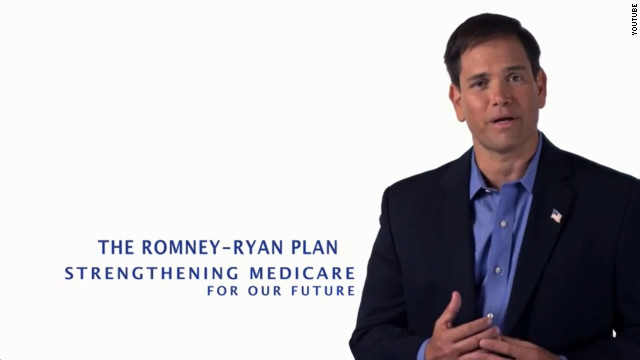 (CNN) - Sen. Marco Rubio takes the starring role in a Romney campaign ad released Thursday, where he argues changes to Medicare for future recipients are necessary, while keeping the current system in place is the "least we can do" for current beneficiaries.

"My mother's 81 and depends on Medicare," the senator from Florida says. "We can save Medicare without changing hers, but only if younger Americans accept that our Medicare will be different than our parents' when we retire in 30 years.

"But after all they did for us, isn't that the least we can do?" he asks.

Romney's selection of Rep. Paul Ryan as his running mate increased the program's profile on the campaign trail. Ryan's plan would allow future beneficiaries to take credit from the program toward the price of private health coverage, but would not change the benefits of current recipients.

Romney has said his proposal would be similar to Ryan's, but has not made clear particular differences.

Democrats have criticized the proposal for turning the program into a voucher system that increases the cost burden on seniors, while Romney has accused President Barack Obama of cutting funds from Medicare to pay for his health reform law. But instead of cuts, the $716 billion Romney and Republicans cited was cost savings, which Ryan also included in his budget plan.

The Romney campaign did not say where the spot would run nor how much it would cost.

Rubio - a rising star in his party – is from a state that has a significant population of seniors and retirees. Romney held a campaign event and taped a television forum appearance in Florida on Wednesday.