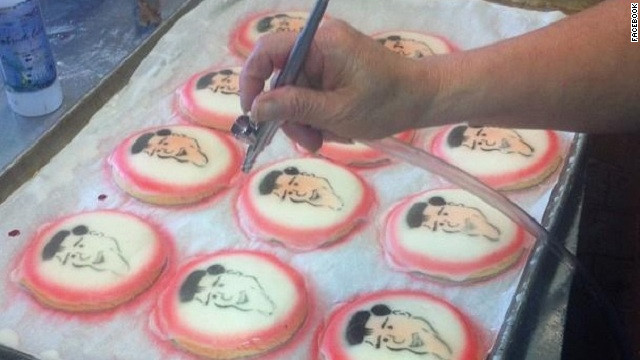 A presidential race good to the last bite

(CNN) - Watching the presidential election play out, it's easy to see that campaigning is a crumby business.

So it's nice when, in the middle of the campaign ad clutter, the debates over who built what, the bus tours, the rallies, the polls with that margin of error - to hear a business owner in the gritty, tough, highly coveted battleground state of Ohio ask, "Do you want a cookie?"

Walk into Busken Bakery in Cincinnati and you will find customers huddled around the freshly-baked faces of Democratic incumbent President Barak Obama and Republican presidential nominee Mitt Romney, each in the form of a tasty, round cookie.

The famous Busken Bakery presidential cookie poll kicked off last week, when the bakery started selling the cookies decorated with the likenesses of Obama and Romney. And every day until the end of the election, Busken will keep tabs on how many people buy Barack and how many buy Mitt.

"This is our eighth election cycle with the cookie poll, and we usually match the electoral vote count within 2%," said Busken.

With sales already at a brisk pace, by the close of business Thursday Busken had sold 1,848 Obama cookies and 1,489 Romney cookies, he said. The numbers are updated every 24 hours.

The cookie poll is credited to Busken's father, who began by running highly successful Super Bowl cookie polls at the bakery. Pick the team, pick the cookie, and pick the winner.

When the NFL tightened up its licensing restrictions, his dad changed games, turning to the political arena in 1984.

And the cookie poll is still getting it right.

"That was the first time a Democrat led from the beginning," he said, adding the result was all the more notable because of the area's strong Republican base.

"1992," Busken recalled. "That was the race between Bill Clinton, President George H.W. Bush and Ross Perot."

The cookie poll was off – it didn't pick Clinton. Busken suspects the presence of third party candidate Perot soured the dough.

Unlike the candidates, the presidential cookies at Busken's bakery taste the same.

There's no difference in price, either. On the company's website, Busken.com, customers are charged $40 for a dozen cookies, regardless of the candidate.

It's easy to stuff the ballot box in this contest, since Busken is not enforcing a "one person, one cookie" rule. Customers are encouraged to "vote" often, even daily if they wish, with no regard to the number of dinners that may be spoiled.

'It's a weird, quirky way to have fun with the election," Busken said of the cookie poll. "We started the campaign earlier this year than in 2008. We'd like to sell more this year."