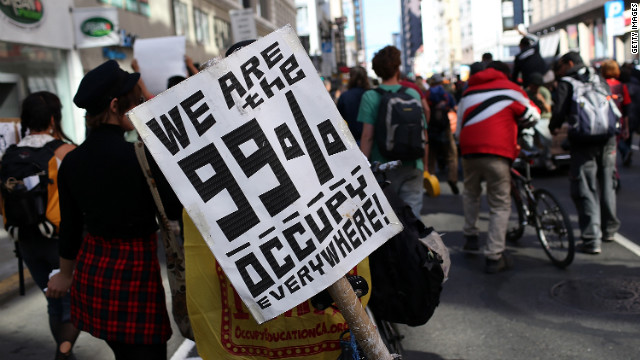 BREAKING: ROMNEY RELEASES 2011 TAXES, PAID A RATE OF 14.1% … Mitt Romney made $13.7 million last year and paid $1.94 million in federal income taxes, giving him an effective tax rate of 14.1%, his campaign said Friday. Romney and his wife, Ann, gave just over $4 million to charity. His effective tax rate was up slightly from the 13.9% rate he paid in 2010. The majority of the candidate's income came from his investments, Brad Malt, a lawyer who presides over Romney's blind trust, said in a blog post. In addition, the Romney campaign said Romney's tax filings from 1990 to 2009 show that the couple paid 100% of the federal and state income taxes they owed and that their overall average annual effective federal tax rate was 20.2%. Annually they never paid an effective rate below 13.66%. – Jeanne Sahadi

TRAIL TRIVIA
(Answer below)
What was the most recent time that the United States has had three presidents in one year?

As students of the news cycle, we know timing is everything - especially when it comes to the “art of the leak.” This week shows how effective a fall surprise can be, whether it be the stolen debate tapes of the 2000 campaign or the secret fundraiser footage mocking the 47% of 2012.

As we watched the news vacuum explode around Romney’s comments, we were struck to see how much more traction the message separating our country into warring halves had than the movement of the 99% whose anniversary was marked on Monday with little fanfare.

Indeed, a year ago, as the Occupy Wall Street protests mounted, it gripped the headlines and introduced myriad new terms into the political dialect, namely the “1%” and the “99%,” as well as disrupting traffic patterns in Washington and New York. All week, we kept asking the same question, “What happened?”

The force that had energy and press coverage, especially from the influential New York Times, seemed to be nonexistent at the political conventions.

When asked if the Occupy movement was a success or a failure, Gene Sharp, founder of the Albert Einstein Institution and expert on political movements, said, “It hasn’t changed politics. It hasn’t changed the economy. But it shouldn’t be expected to do something that is impossible. You can’t change the distribution of wealth in the economy, or make those politics more democratic, simply by a demonstration – which is purely symbolic.”

We also feel that the message of the 99% assumes near unity, which doesn’t exist in this polarized political year, whereas the 47% is a more apt metaphor for a country where polls quite regularly fall along the 47% national, political split. The Mitt Romney metaphor is also more apt for a campaign that truly is about the size and role of government, or as we have written numerous times, about the tug-of-war between economic freedom and political fairness.

Nonetheless, while the secret tapes will have a bigger effect on the presidential election, the 99% might re-emerge post-election and have more staying power, said Stephen Zunes, editor of “Nonviolent Social Movements: A Geographical Perspective,” who wrote an op-ed this week saying the Occupy movement “fizzled” but was a success in moving the political narrative into its court, pushing President Obama to address income inequality and tax policies.

“My guess is that since the 47% figure was rather arbitrary and Romney’s categorization of that 47% was inaccurate on a number of levels, few people will want to embrace it in terms of an identity,” Zunes said, “However, since the film clip so dramatically reinforces the Obama campaign’s effort to portray Romney as the quintessential example of the 1%, my guess is that his comments and related matters it raised will continue to be part of the debate leading up to the election.”

“In the longer run, I believe that a populist economic message that emphasizes the enormous economic inequality in the United States, the unfair tax code and the overbearing political influence of power corporations and wealthy individuals will have staying power. Outside of the glare of election year partisanship, then, I do expect many of the issues raised in the Occupy protests to come to prominence in the not-too-distant future.”

As for now, that future is many news cycles away, as conservative commentator and CNN contributor Mary Matalin best exhibited in an interview with CNN on Tuesday when she said that Romney should double down on his remarks because the world is divided between “makers and takers, producers and parasites.”

Those are fighting words. And this campaign year is more about a fight than a movement.

Leading CNNPolitics: Obama, Ryan trade charges on health care and Medicare
President Barack Obama and GOP vice presidential nominee Paul Ryan on Friday traded sharp criticism over health care reforms and Medicare, with each telling a leading advocacy group for senior citizens that the other was being untruthful. – Tom Cohen

Leading Drudge: 100 days to go until largest tax hikes in history
Sunday will mark the start of the 100-day countdown to “Taxmageddon” – the date the largest tax hikes in the history of America will take effect. They will hit families and small businesses in three great waves on January 1. – From Americans For Tax Reform

Leading HuffPo: Happy Now?
Mitt Romney has released his tax returns for 2011. Ahead of the disclosure, aides indicated that the Republican presidential contender earned nearly $13.7 million last year and paid an effective tax rate of 14.1 percent, amounting to more than $1.9 million in taxes.

Leading Politico: President Obama changes 'Change'
So much for the bright, bold colors of hope and change. President Barack Obama admitted Thursday that his re-election campaign is more about gritty American realism. The response from Democrats: About time you came around. – Edward-Isaac Dovere and Darren Samuelsohn

Leading The New York Times: Before debates, Romney faces a daunting path
There are seven days until early voting begins in Iowa, less than two weeks until the first debate and 46 days left in the race for Mitt Romney to change the dynamic of a campaign that by many indicators is tilting against him. That, advisers to President Barack Obama acknowledge, is plenty of time. – Jeff Zeleny and Jim Rutenberg

- Obama addresses ‘change from the inside’ comments, pivots to Romney attack -
PRESIDENT BARACK OBAMA AT A CAMPAIGN EVENT IN VIRGINIA: “Yesterday I made this same point at a town hall in Florida. I said one thing I have learned is that you can’t change Washington just from the inside… Now, for some reason my opponent got really excited. He rewrote his speech really quick. He stood up at a rally and proudly declared ‘I’ll get the job done from the inside.’ What kind of inside job is he talking about? Is it the job of rubber stamping the top-down, you are on your own agenda of this Republican Congress? Because if it is we don’t want it. If it is the job of letting oil companies write our energy policy, we don’t want it. If it’s the job of outsourcing writing our tax code, we don’t want it.”

- Clinton: ‘What happened in Benghazi was a terrorist attack’ -
SECRETARY OF STATE HILLARY CLINTON AT AN EVENT WITH THE PAKISTANI FOREIGN MINISTER: “What happened in Benghazi was a terrorist attack, and we will not rest until we have tracked down and brought to justice the terrorists who murdered four Americans. And we are taking aggressive measures at all of our posts to protect our staffs and their families along with locally employed people who provide so many important contributions to the work of our missions.”

- The man who brought us 9-9-9 says he would have a ‘substantial lead’ over Obama (because of his depth) -
HERMAN CAIN IN AN EVENT AT THE UNIVERSITY OF FLORIDA, ACCORDING TO THE GAINESVILLE SUN: “The reason is quite simple: I have some depth to my ideas… Stupid people are ruining America, and we've got to take it back.”

- Bill Clinton on Romney, taxes and voter suppression -
FORMER PRESIDENT BILL CLINTON IN AN INTERVIEW WITH CNN’S FAREED ZAKARIA…
On Romney’s 47% comments: “Do I think there are some Americans who are trapped in a cycle of dependency? Yes, I think that is a problem. That's why I supported welfare reform, to change it from an entitlement system to a work-based system, to an empowerment system. But the money we spend is not out of line with other advanced countries. In fact, we spend a smaller percent of our GDP than almost any other country. And the 47%, those that are adults, they do pay taxes. They pay Social Security taxes. They pay Medicare taxes. They pay state and local taxes.”

Clinton on voting: “How much will the vote be lessened or reduced by the fact that in Florida, except for four counties, the pre-election voting, the advanced voting, has been cut down to eight days and doesn't include the Sunday before the election, which is an arrow aimed straight at the heart of the African-American churches who pull up the church buses on the Sunday before the election and take elderly people who have no cars or people who are disabled to the polls so they can vote? How much is all that going to affect the turnout? I've never in my lifetime - nobody has ever done anything quite this blatant.”

Dan Froomkin (@froomkin)
If Romney had taken all his deductions, he wd have paid closer to 9% tax in 2011. He paid extra VOLUNTARILY just for optics.

Gut Check Flashback: In July, Harry Reid claimed a Bain investor told him that Mitt Romney 'didn't pay any taxes for 10 years'… Senate Majority Leader Harry Reid, D-Nevada, has what he says is an informed explanation for why Mitt Romney refuses to release additional tax returns. According to a Bain investor, Reid charged, Romney didn't pay any taxes for 10 years. – Sam Stein and Ryan Grim

In March of that year, Republican Rutherford B. Hayes ended his term as president and James Garfield, a close political ally to Hayes, became the 20th president.

Garfield’s term, however, was cut short when he was shot by Charles Guiteau only four months after he was inaugurated. With substantial wounds to his abdomen and back, Garfield struggled to stay alive during the summer of 1881 and died on September 19.

The next day, Vice President Chester Arthur was sworn in, making him the third president in a year.

Had this happened before? Yes.

In 1841, Martin Van Buren, William Henry Harrison and John Tyler were all president. Harrison died on his 32 day in office.