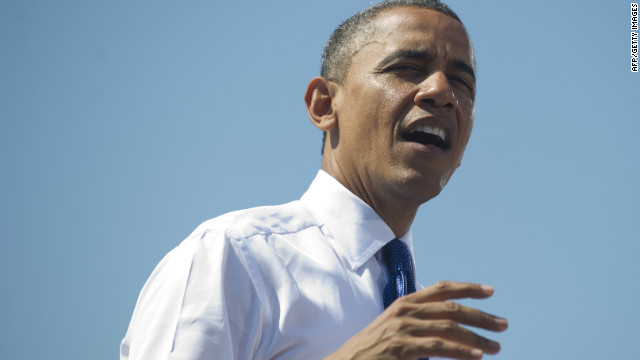 Obama flips the argument, says Romney aspires for 'inside job'

(CNN) - President Barack Obama hit back against Mitt Romney's latest attack on Friday while defending his earlier argument that Washington cannot be changed from the "inside."

On Thursday, the GOP presidential nominee pounced on Obama's initial comments from a presidential forum on the Spanish-language network Univision.

"The most important lesson I've learned is that you can't change Washington from the inside," Obama said. "You can only change it from the outside."

Within hours, Romney was on the attack. The White House hopeful peppered a Sarasota, Florida speech with references to Obama's Univision remark, saying the president had essentially given up on his 2008 ideals of "hope" and "change."

"The president today threw in the white flag of surrender again. He said he can't change Washington from inside, he can only change it from outside," Romney said to an audience of several thousand. "Well, we're going to give him that chance in November. He's going outside!"

Romney said he "couldn't believe it" when he heard reports the "president of change" had said Washington needed to be changed from the outside.

"Isn't that amazing? No wonder he's had such a hard time over the last four years," Romney said. "His first two years he had a Democratic House, Democratic Senate, he got to do whatever the heck he wanted to, but he says he can't change it from the inside. Well, I will."

It didn't take long for the president to respond. While speaking at a noontime campaign rally in Woodbridge, Virginia on Friday, Obama unleashed a series of new lines pounding Romney over the Republican's reaction.

Defending his comment, Obama argued he was saying you can't change Washington "just" from the inside and took issue with Romney's claim that the Republican nominee could get the job done, himself.

The president blasted Romney's goal as a naive "inside job."