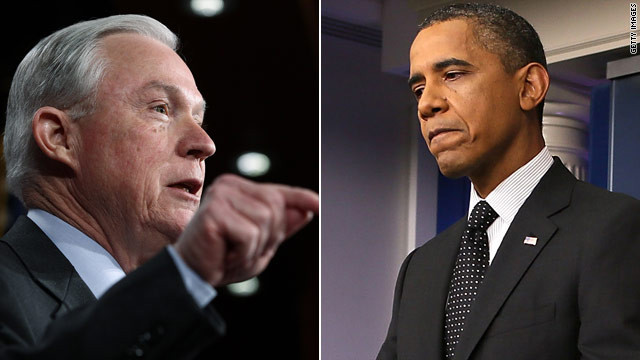 Washington (CNN) - President Barack Obama and Sen. Jeff Sessions argued over inaction on Capitol Hill in their Saturday weekly addresses, with the Alabama Republican presenting his case as though the audience were a jury.

“As a prosecutor, I learned to trust the wisdom of these everyday citizens. I also learned, more than anything else, jurors want the facts,” Sessions said in the GOP address. “Today, my goal is to present to you the facts as honestly and directly as I can.”

He and Obama saw many of the facts differently, but at least agreed that legislators left the nation's capital this weekend with their business unfinished.

“Last week, without much fanfare, members of the House of Representatives banged a gavel, turned out the lights, and rushed home, declaring their work finished for now,” Obama said in his weekly address. “If that frustrates you, it should, because their work isn’t finished.”

Republicans have control of the House. Democrats, meanwhile, hold the White House and Senate, and Sessions made the case that they are at fault.

“Adding to the chaos, the Senate Democrat majority has decided to adjourn through November having utterly failed to meet its most basic obligations,” he said. “For the last three years, in a time of national crisis, Senate Democrats have deliberately violated to legal requirement to produce a budget plan.”

The Senate adjourned early Saturday morning after a series of votes, while the House adjourned during the day on Friday. House members and staff streamed down the Capitol steps after the session ended and they were free to return to their districts, where many are up for re-election in a few weeks.

The president, who is expected to hit the campaign trail himself over the 45 days between now and November 6th, called for Congress to reconvene after the election to work on legislation including a farm bill, jobs measures, and his tax proposal.

“After going home and listening to their constituents for a few weeks, members of Congress should come back in November and do this work,” Obama said. “They should do the right thing for veterans and farmers, for responsible home owners and small businesses, for Americans everywhere who are just trying to get ahead.”

Sessions faulted Democrats for blocking budget measures, and said, “if given the chance, Republicans will get this government under control. A Republican Senate will pass a budget.”

Obama has his next opportunity to make his case in person to voters on Saturday when he holds a campaign event in Wisconsin. Sessions’ seat is not on the ballot this year and Republican presidential nominee Mitt Romney has no public events scheduled on Saturday, although GOP vice presidential candidate Paul Ryan will campaign in Florida.