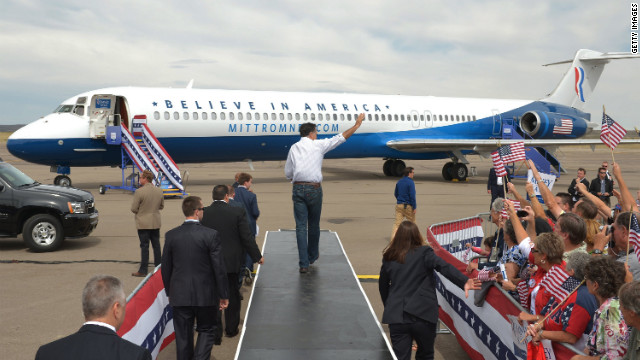 BREAKING: OBAMA UP BY FIVE IN OHIO. One day before Mitt Romney's campaign starts a three day bus tour in Ohio, a new poll indicates the Republican nominee is behind President Barack Obama by five percentage points in the Buckeye State. Just over half – 51% – of likely voters back the president, while 46% support Romney, according to a new survey released Sunday and conducted by the University of Cincinnati's Institute for Policy Research. The survey was taken September 13-18, mostly before video emerged of controversial comments Romney made at a May fundraiser, in which he argued nearly half of Americans are "victims" who are "dependent" on the government because they don't pay federal income taxes. – Ashley Killough LINK

World leaders are convening in New York this week for addresses, bi-lateral meetings, and events associated with a gathering of the United Nations General Assembly. Which of the 193 members was the most recent to join the body?

Nine days until the first presidential debate, the battle to define goals and expectations caught our eye.

With this in mind, we reached out to Republican debate/communications strategist Brett O’Donnell (BIO) to ask him his thoughts.

Question: You worked with the Romney campaign for what many considered his best debate performance. What do you think Mitt Romney has to do to “win” the debates?

O’DONNELL: Thank you. First, I try and fight against the idea of winning and losing debates since it minimizes what voters learn about the candidates. That said, in order for Romney to perform well in the debates and convince voters to vote for him, he has to do two fundamental things. First, he has to make the debates about the president's policies. So far he has not been able to completely connect the president to the cause of the continued economic downturn we're experiencing. So while voters agree the economy is bad, they're not completely sold it's the president's fault. Second, he has to cast an alternative vision that voters think is a superior path to the one we are on right now. In other words, he has to have a way out. Much like 1980, voters know the economy is bad, but he has to convince them it’s the president's fault and that he has a plan to lead the country in a better direction, for ALL Americans. Governor Romney has to stay on offense - meaning, he has to stay on his message and not take the bait and get defensive.

Question: A recent CNN/ORC poll (LINK) shows that Americans think Barack Obama will win the debates. There is now a very active game among campaign strategists to downplay their own candidate’s expectations. How important are expectations? Would you rather go in as the underdog?

O’DONNELL: The expectations game is enormous for the candidates because voter perception before the debates influences how they think they did in the debates. That said lowering expectations isn't always the best idea. You don't want the bar too low so that you can never convince the public you actually won. I would rather be the underdog because if you over perform you get significantly more credit since the audience wasn't expecting you to win.

Question: What are Mitt Romney’s greatest strengths as a debater? Do you think the primary practice (and a whopping 20 debates) will give him a leg up on the president?

O’DONNELL: Governor Romney is an extremely competent debater. He managed to navigate 20 of these successfully and most often was viewed as the winner in each. He is a skilled orator. Has nimble command of the facts, and has been seasoned through not just this series of primary debates, but also through the last set of primary debates and very aggressive senate and gubernatorial debates. Governor Romney is a skilled technician and knows how the economy works. If he keeps the debate focused on economic issues, then he has an advantage in the debates. The president is very competent as well. We should expect some of the best presidential debates we've had, and the chance to see the two spar over policy directly rather than through the airwaves or the press.

Leading CNNPolitics: In the final days of 2012 campaign, it’s all about slivers of voters
Undecided voters represent a narrow sliver in swing states. Many, political experts say, are either politically clueless or have waffled for months on their choice for the Oval Office. Both campaigns realize they have to secure their base of supporters while, at the same time, pursue and win over that dwindling, fickle slice of persuadable voters who have yet to make up their minds. – Halimah Abdullah LINK

Leading HuffPo: Some Friends You Are!
GOP vice-presidential nominee Rep. Paul Ryan (R-Wis.) hit back against conservative critics of the GOP ticket in an interview with the Milwaukee Journal-Sentinel Saturday night. "A, we still have a ways to go. We still have a lot left that we're planning on doing," he said. "B, I think that's just what conservatives do by nature. I think that's just the nature of conservative punditry is to do that - to kind of complain - about any imperfection they might see." – Luke Johnson LINK

Leading The New York Times: Running as Outsiders, With a Catch: They’re In
Members of Congress would prefer not to advertise it — they are doctors and cowboys and anything else, while their opponents are Washington insiders. – Jennifer Steinhauer LINK

- Romney responds to Obama's 'bumps in the road' comment -
2:23 P.M. ET… AT A CAMPAIGN EVENT IN PUEBLO, COLORADO MONDAY MORNING: “Bumps in the road? We had an ambassador assassinated. We had a Muslim Brotherhood member elected to the presidency of Egypt. Twenty thousand people have been killed in Syria. We have tumult in Pakistan. And, of course, Iran is that much closer to having the capacity to build a nuclear weapon.These are not bumps in the road, these are human lives. These are developments we do not want to see.”

- Romney is ‘purposely misinterpreting’ Obama, OFA spokeswoman counters -
2:50 P.M. ET… OBAMA CAMPAIGN SPOKESWOMAN EMAILS REPORTERS: “Today, we saw what Mitt Romney meant when he told a closed door group of high-dollar donors that he would ‘take advantage of the opportunity’ to politicize an international crisis to help his campaign. He’s purposely misinterpreting the President’s words and making reckless statements about the death of four Americans in Libya, apparently for the sole purpose of his own political gain. Using this incident to launch political attacks should be beneath someone seeking to be our nation’s Commander-in-Chief.”

- GOP senate candidate: Libya attack being used politically -
2:54 P.M. ET… THE REPUBLICAN SEEKING TO UNSEAT SEN. SHERROD BROWN IN OHIO, JOSH MANDEL, SAYS AT A PAUL RYAN CAMPAIGN EVENT IN LIMA, OHIO: “You know a lot of politicians in Washington try to tiptoe around what’s happening in the Middle East and they want to be politically correct. Governor Romney understands. We are in a fight right now. We are in a fight against radical Islam. There are radical Muslims in the Middle East who are over-running our embassy in Egypt, killing our own ambassador in Libya and, in my mind, we need a commander in chief like Mitt Romney who understands what that fight means and will take it to the enemy.”

- The email exchange everyone is talking about –
THE STATE DEPARTMENT’S PHILIPPE REINES EMAILS JOURNALIST MICHAEL HASTINGS: “How's that for a non-bull**** response? Now that we've gotten that out of our systems, have a good day. And by good day, I mean F*** Off.” LINK

- ‘Should Israel be wiped off the face of map?’ Piers Morgan asks -
IRANIAN PRESIDENT AHMADINEJAD RESPONDS: “If a group comes and occupies the United States of America, destroys homes while women and children are in those homes, incarcerate the youth of America, impose five different wars on many neighbors, and always threaten others, what would you do? What would you say? Would you help it? Would you help that entity? Or would you help the people of the United States? So when we say ‘ to be wiped,’ we say for occupation to be wiped off from this world. For war-seeking to wiped off and eradicated, the killing of women and children to be eradicated. And we propose the way. We propose the path. The path is to recognize the right of the Palestinians to self-governance. Allow the people of Palestine to make decisions regarding their own future. Imagine one day in Palestine there is no longer occupation, occupation no longer exists in Palestine.” MORGAN: “Do you believe in a two-state solution?” AHMADINEJAD: About the decision of the people of Palestine, I cannot express an opinion. That is their prerogative.”

The African nation of South Sudan was admitted to the United Nations on July 14, 2011, days after it declared sovereignty from Sudan.

In recognizing the new country, President Barack Obama said at the time, “Today is a reminder that after the darkness of war, the light of a new dawn is possible. A proud flag flies over Juba and the map of the world has been redrawn.”

Nearly two decades of civil war along religious and tribal lines in what had been Africa’s largest country has resulted in millions dead or displaced. Peace talks between Sudan and South Sudan continued this week over, among other issues, the two countries’ border.

The country is home to 10 million people, the U.S. estimated in July 2012. It’s population is largely rural and illiterate. The country’s flag is one of the world’s most colorful: It is one of two with a basic design including six colors.

Preceding South Sudan in admission to the United Nations was Montenegro, admitted on June 28, 2006.

Congratulations to Dave Stroup (@davestroup), who lived up to his billing as "your relentlessly idealistic rapid response team" with his correct answer.