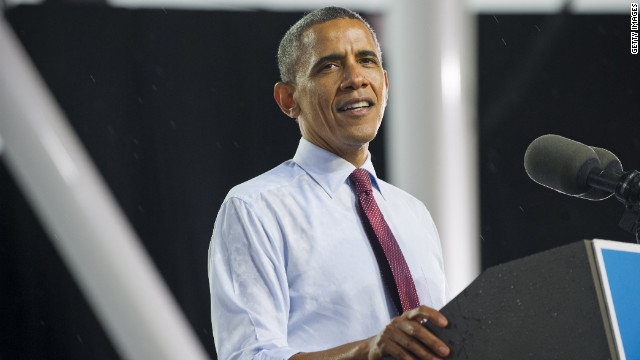 (CNN) - Mitt Romney's campaign took President Barack Obama to task Sunday night for a comment the president made in a CBS News interview that is posted online but did not air on the network's broadcasts.

"You know, do we see sometimes us going overboard in our campaign, the mistakes that are made, or the areas where there's no doubt that somebody could dispute how we are presenting things?" Obama said in a "60 Minutes" interview. "That happens in politics."

Seizing on the comments, Romney's campaign put out a statement late Sunday night, saying Team Obama and its allies have "repeatedly shown a reckless disregard for the truth" this cycle.

"Tonight, even President Obama himself admitted his campaign has gone 'overboard' and made mistakes. The real test now is whether or not the President will change course and honor his long-discarded promise to change the tone in Washington," Romney campaign spokesman Ryan Williams said in a statement.

While both campaigns push back on every ad released by their opponent, Romney's team and other Republicans especially railed on the president and his allies over an ad released by the pro-Obama super PAC Priorities USA Action last month. The ad essentially placed blame on Romney for the loss of a steelworker's health insurance and his wife's eventual cancer death after the worker's plant went bankrupt following a buy-out from Romney's former private equity firm.

The controversial ad quickly created a firestorm of criticism against the group, run by former Obama White House officials. While the spot did not broadcast on the airwaves–with the exception of a local TV station accidentally airing the ad–news media attention gave it a tremendous amount of exposure.

The Obama campaign never officially condemned the spot. And, by law, super PACs and the campaign they support are not permitted to coordinate.

Fact-checkers, however, have called out both sides in the race for being misleading in ads and talking points. Romney especially took heat for making the case last month that Obama's administration had "gutted" the welfare-to-work program–a claim widely disputed by independent fact-checkers and news organizations.

In August Romney faulted outlets for showing bias in their fact-checks, even though his campaign has used analyses by some of the groups, like FactCheck.org, to bolster its own arguments. Furthermore, his pollster, Neil Newhouse, said on ABC News the campaign will not be "dictated by fact-checkers."

In his CBS interview Sunday, Obama–who has been highly critical of negative campaign ads in his stump speeches–argued the war of words in the final 43 days of the race may be "sharp" but will provide a point of contrast for voters.

"The truth of the matter is, most of the time we're having a vigorous debate about a vision for the country, and there's a lot at stake in this election," Obama said. "So is it going to be sharp sometimes? Absolutely. But will the American people ultimately have a good sense of where I want to take the country and where Governor Romney wants to take the country? I think they will."