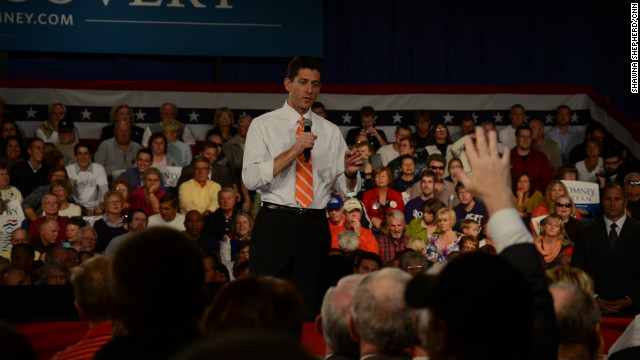 "When the president came into office, he made these grand speeches, beautiful rhetoric, great promises, and he made the case that the power of his personality and his persuasion powers would calm things in the Muslim World, would make things, would make people respect us and like us that much more," Ryan said during a town hall in Ohio's Allen County.

The Republican vice presidential nominee recalled the deadly attacks on the U.S. Consulate in Benghazi, Libya, killing four including the U.S. ambassador to Libya, and compared it to President Jimmy Carter's hostage crisis in Iran where 52 Americans were held hostage at the American Embassy for 444 days.

"I mean, turn on the TV and it reminds you of 1979 Tehran, but they are burning our flags in capitals all around the world, they are storming our embassies," he said. "We've lost four of our diplomats and what is the signal that our government is sending the rest of the world?"

"When you project American weakness - the superpower projecting weakness - that creates a vacuum, that creates a void," Ryan added. "That void gets filled by people in countries who do not share our interests. It means our adversaries are that much more tempted to test us and our allies are much less likely to trust us, like Israel."

Ryan condemned the Democratic president for a series of foreign policy episodes - from the latest unrest in the Middle East to Afghanistan to defense cuts - that he believes project "weakness" and threaten national security in the United States.

Wisconsin-native Ryan, who has served in the House of Representatives for 14 years, condemned Obama for presiding over Defense Department budget cuts that threaten jobs, including in Lima where Army M1 Abrams tanks are built and where the vice presidential hopeful kicked off his Ohio bus tour.

Although Ryan has blamed Obama for what he has called "irresponsible defense cuts" during last year's budget negotiations, the House Budget Committee chairman, himself, helped guide and pass the Budget Control Act through Congress.

At the town hall held at the Veterans Memorial Civic Center downtown, Ryan took a question from a mother who has three children serving in the Armed Forces. She asked him what the Romney-Ryan plan would be to bring her children home from Afghanistan.

Ryan said was in favor of the transition agreement to end combat operations in late 2014 but he chided Obama for not listening to his commanders on the ground and vowed a Romney-Ryan administration would never put politics ahead of "what's right for national security."

Referring to the president, he said Obama, "just took 22,000 people out of theater this month, which I would argue is a politically motivated timetable before an election, but we're still giving our soldiers the same mission. We're just making them do this mission with fewer people. And when you send your men and women out with fewer people than what the commanders on the ground say they need you are putting them in jeopardy."

On the eve of Obama's speech Tuesday in New York to the United Nations General Assembly, Romney's running mate took a swipe at the president for deferring leadership to the member states.

"I think the president on too many occasions has deferred our foreign policy leadership to the U.N. Security Council, to the U.N. This means Russia and China get to veto what we want to do," said Ryan. "Why do we want to give them that kind of clout over our national security interests?"