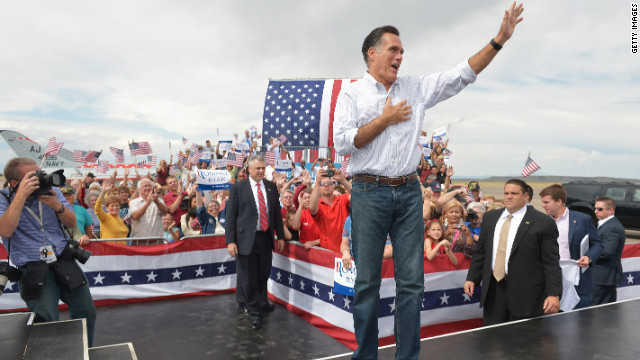 Romney hammers Obama on 'bumps in the road'

Pueblo, Colorado (CNN) – President Barack Obama's suggestion that chaos in the Middle East merely represents "bumps in the road" to democracy was met with scathing criticism from his Republican rival Monday at a campaign stop in Colorado.

Speaking on a runway at a Pueblo airport, Mitt Romney said Obama's comments belittled the gravity of the situation unfolding overseas, including the death of America's ambassador to Libya two weeks ago.

"These are not bumps in the road, these are human lives," Romney said. "These are developments we do not want to see."

In a "60 Minutes" interview that aired Sunday, Obama said recent unrest in Libya would not prevent the country from developing a functioning government that adequately represents the Libyan people.

Romney said Sunday those comments were "surprising to people" given the unrest developing in a list of international hotspots.

"Bumps in the road?" Romney asked. "We had an ambassador assassinated. We had a Muslim Brotherhood member elected to the presidency of Egypt. Twenty thousand people have been killed in Syria. We have tumult in Pakistan and of course Iran is that much closer to having the capacity to build a nuclear weapon."

Romney's comments came the same day Obama traveled to New York to attend the United Nations General Assembly. Unlike years past, Obama has no bilateral meetings scheduled with foreign leaders, a decision that has been met with sharp criticism from the president's rivals.

"You are constantly engaged in matters of foreign affairs and national security. And that's what this president is doing," Carney said.

In Colorado, Romney echoed his criticism of the president's handling of foreign events that began two weeks ago following the attack on the U.S. consulate in Benghazi, Libya, as well as an attack on the American Embassy in Cairo.

"This is time for a president who will shape events in the Middle East, not just be merciful or be at mercy of the events of the Middle East," Romney said. "I will get America on track to have the kind of leadership we need so we can shape the future of this part of the world and keep America strong."

Lis Smith, a spokeswoman for Obama's campaign, said the GOP nominee was "purposely misinterpreting the President's words and making reckless statements about the death of four Americans in Libya, apparently for the sole purpose of his own political gain."

"Using this incident to launch political attacks should be beneath someone seeking to be our nation's Commander-in-Chief," Smith said.