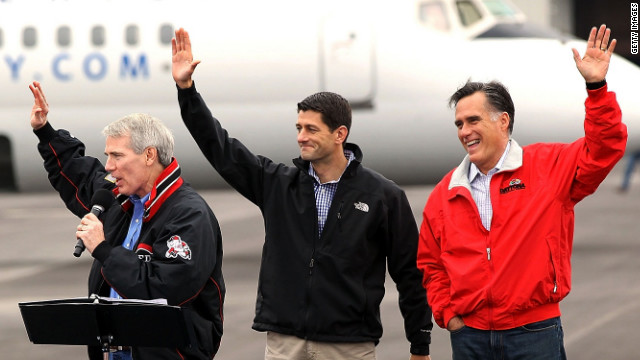 Vandalia, Ohio (CNN) – It’s a state that went for President Barack Obama in 2008, but Mitt Romney and Paul Ryan are hoping Ohio will vote Republican this time around – after all, no Republican has advanced to the White House without winning the Buckeye State.

“I got my lucky Buckeye. My buddy Rob Portman gave me this lucky Buckeye. It means we are going to win Ohio,” Ryan, the GOP vice presidential nominee, said on Tuesday as he shared the stage with Romney and Portman, a U.S. Senator from Ohio.

The Republican ticket appeared together for a joint rally outside of Dayton as part of the campaign’s “Stronger Middle Class” bus tour through the battleground state. Romney and Ryan are slated to appear at separate events for most of the tour.

The latest CNN Poll of Polls in Ohio shows Obama with a six point edge over Romney, 50%-44%. Rich Beeson, a Romney adviser, said Tuesday the GOP effort was confident it could still take the state.

“There’s still 42 days to go. We are by any stretch inside the margin of error in Ohio. And the Obama campaign is going to have some problems there,” Beeson said.

At Tuesday’s rally, thousands of people gathered on an airport tarmac in Vandalia to see the running mates together. They were also joined on stage by Sen. Rand Paul of Kentucky, who appeared with Ryan earlier in the day at a rally in Cincinnati.

The former governor of Massachusetts was appropriately wearing a jacket in Ohio State-red, but his outerwear also honored another crucial swing state: it bore the logo of Daytona International Raceway, in Florida.

Portman, who has been playing Obama in weekend debate preparations with Romney, has been filling the role well, the White House hopeful said.

Romney suggested when he goes up against the actual president at their first debate next week, his own policy positions and arguments will trump good debate skills.

The last time Romney and Ryan appeared at an event together was in Lakeland, Florida, on August 31, right after the three-day Republican National Convention in Tampa. The presidential running mates did a number of interviews together before they went their separate ways on Tuesday afternoon.