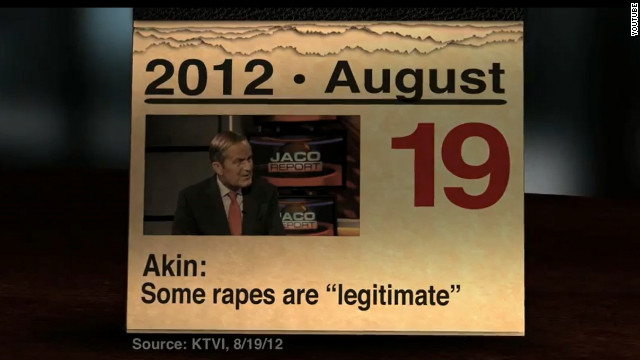 (CNN) - Sen. Claire McCaskill is using her rival Todd Akin's comments on "legitimate rape" in a new television ad, part of a statewide buy in Missouri for the incumbent Democrat.

The ad frames Akin as out of touch with Missouri voters, also hitting the Republican congressman for his stance on social security, Medicare, the minimum wage and student loans.

But it's Akin's comments on rape, which came in August and caused an uproar from Republicans and Democrats alike, that provide the ad its ammunition.

"On August 19, Todd Akin said only some rapes are legitimate," a narrator in the ad says. "What will he say next?"

Akin won a surprise victory last month in a crowded GOP primary, coming from behind in the polls to secure the Republican nomination. Less than two weeks later, he made the now infamous argument that a woman is biologically capable of blocking "legitimate rape."

"From what I understand from doctors, that's really rare," he said. "If it's a legitimate rape, the female body has ways to try to shut that whole thing down."

The remark soon caused public outrage and completely shook his candidacy. Top Republican leaders, including Mitt Romney, were calling for Akin to drop out within days.

Yet Akin declared he was staying in the race, a decision he reiterated Tuesday, the deadline for the congressman to withdraw his candidacy without difficulty.

"The last number of weeks, a number of people have asked me: 'Are you quitting, are you dropping out?'" Akin said at an event in St. Louis. "I don't believe that that is really my decision. The decision was made by the voters of the state of Missouri."

CNN's Ashley Killough and Kevin Bohn contributed to this report.