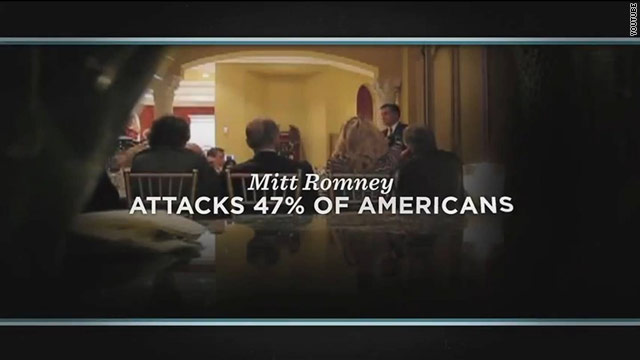 (CNN) – President Barack Obama's re-election campaign released a new television ad Tuesday in eight key battleground states, capitalizing on comments made by Mitt Romney at a private fund-raiser in May.

The ad is running in eight of the nine states CNN considers "toss ups"–New Hampshire, Virginia, North Carolina, Florida, Ohio, Iowa, Colorado and Nevada. The Obama campaign is not airing the ad in Wisconsin, a swing state where Obama has an advantage over Romney 52%-43%, according to a CNN Poll of Polls.

Tuesday's ad mirrors the theme of another Obama campaign ad released Monday that also picks up on Romney's controversial comments. Both ads use secretly recorded footage of the GOP candidate speaking candidly to top-dollar donors at a private fund-raiser in Florida, where he argued 47% of Americans will automatically vote for the president because they are dependent on government support.

While Democrats have continued to pounce on the comments, Romney defended the crux of the remarks as an accurate portrayal of his campaign's message, though he admitted a lack of eloquence in his delivery.

The attacks also come after the Romney campaign released their candidate's 2011 tax return and a summary of his returns from 1990-2009. Romney's 2010 tax returns were made public back in January. The returns show the former Massachusetts governor made $13.7 million last year and paid $1.94 million in federal income taxes, giving him an effective tax rate of 14.1%.

The Obama campaign's ad, "Fair Share," begins with the president's stamp of approval and proceeds to hammer the GOP challenger as writing off a large portion of Americans in his fund-raiser comment.

"When Mitt Romney dismissed 47% of Americans for not pulling their weight, he attacked millions of hard working people making 25, 35, 45 thousand dollars a year," says the narrator, while also ticking off a series of taxes that most Americans pay, including social security, state, local, gas, sales and property.

"Romney paid just 14 percent in taxes last year," said the narrator. "On over 13 million in income. Almost all from investments."

The ad concludes: "Instead of attacking folks who work for a living shouldn't we stand up for them?"

The Romney campaign responded to Monday's ad releasing the following statement about the criticism:

"President Obama's tax increases on middle class families will not make the next four years any better than the last four. Under President Obama's failed leadership, 23 million Americans are struggling for work with 46 million Americans on food stamps and more people in poverty than ever before," said Romney campaign press secretary Andrea Saul. "Mitt Romney has a plan for a stronger middle class that will lower tax rates across the board and jumpstart economic growth creating 12 million job."

CNN's Dana Davidsen and Arielle Hawkins contributed to this report