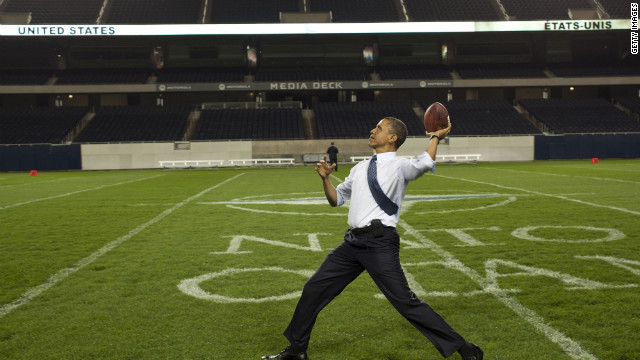 (CNN) – Even the president is ready for the replacement refs to go.

Anger at the replacement refs boiled over Monday after a controversial end zone call determined the fate of the game between the Green Bay Packers and the Seattle Seahawks. Obama wasn't the only politician to weigh in.

Paul Ryan, Romney's running mate and a congressman from Wisconsin, took it a step further, saying in Ohio, '"Give me a break. It is time to get the real refs."

"We need to get the strike over and get more experienced people in there," former President Bill Clinton told CNN's Piers Morgan Tuesday.

Tuesday wasn't the first time Obama weighed in on the replacement officials, who are substituting for regular referees engaged in a labor lock-out. Last week the president asked a radio host in Ohio, "Is it just me or do we have to get our regular refs back?"

"I can't get involved with it, but I'm just expressing my point of view as a sports fan," Obama said of the labor dispute keeping NFL referees from officiating.

Obama asked Sullivan if he was still supporting the Jets. Sullivan said he told Obama, "I support the Jets, but am tired of hearing about [Tim] Tebow."

Obama recently questioned the two quarterback system the Jets employ, using both Tim Tebow, who joined the team this season, and Mark Sanchez, who has played for the Jets since 2009.

"I've got to tell you, I don't like the idea of a quarterback controversy at the start of a season," Obama told WNBS in Ohio. "If I were a Jets fan, I'd be pretty nervous. Sanchez is not Tom Brady yet, but he led them to the playoffs two years in a row. I think Tim Tebow seems to be a wonderful young man and he's got just a great, winning attitude … but there's going to be a lot of tension in that situation."