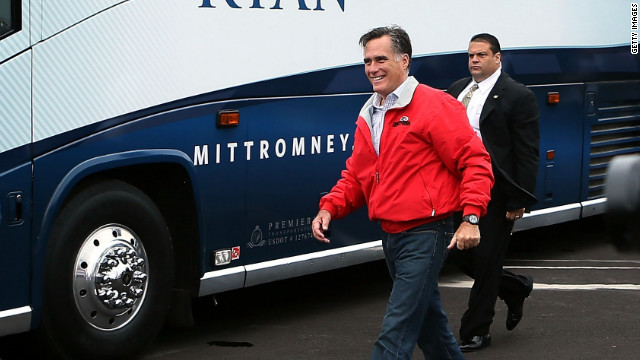 What we learned from our interview with Mitt Romney

Columbus, Ohio (CNN) - If there's one thing we learned from Mitt Romney during the course of CNN's interview with the GOP nominee in Ohio Tuesday, it's that he plans to aggressively stay on the attack against President Barack Obama in the final six weeks of the campaign.

Consider his comments on the diplomatic attack that left four Americans, including U.S. Ambassador Chris Stevens, dead in Libya. Romney has criticized the president for calling recent events in the Middle East "bumps in the road" and suggested Obama had labeled Stevens' death one of those "bumps."

When pressed on whether he stood by the attack, Romney said, "I'm not sure which developments in the Middle East he would consider bumps in the road."

He then suggested the Obama administration was trying to hide the truth behind what really happened in Benghazi.

"The White House's failure to acknowledge that - that the assassination of our ambassador was a terrorist attack, a terrorist event - suggests that they are trying to paper over the seriousness of what's happening in the Middle East," Romney told CNN.

Romney seemed unfazed about the latest poll numbers in Ohio, a state that is a near must-win for the Republican contender. A new Washington Post poll finds Romney trailing the president by eight points, though that was still inside the margin of error.

Asked whether it was a tactical error to put as large a focus on fundraising as he has placed on actual campaigning at rallies in the last few weeks, Romney demurred.

"Polls go up and down. But frankly, you're going to see the support that I need to become president on Election Day," Romney said.

He also declined to answer whether the hidden-camera video released last week by Mother Jones shows the real Mitt Romney. Instead, Romney presented himself as someone who is looking out for working Americans, saying he is "overwhelmingly committed to helping every American."

"People at the top are doing fine. They'll probably do fine whether Barack Obama were reelected or not. It's the people in the middle and at the bottom that are struggling in the Obama economy. That's why I'm running, is to help them," Romney said in the interview.

In recent days, the former Massachusetts governor has accused the president of trying to "fool people" about the Romney record. But when asked whether his own ads have played fast and loose with the facts, Romney stood his ground.

"We've been absolutely spot on. And any time there's anything that's been amiss, we correct it or remove it," Romney said.

Romney officials did not immediately respond to CNN's request to name one ad the campaign had taken down.

The GOP contender defended one controversial ad, which accuses the president of taking the work requirements out of welfare. Several fact-checking organizations, including CNN, have deemed the spot "false."

"It has been shown time and again that the president's effort to take work requirement out of welfare is a calculated move," Romney said in defense of the ad.

Romney went on to accuse the president of taking "work out of the food stamps requirement."

"Participants in the program are required to be actively looking for work, take part in training programs as directed, and accept jobs that are offered," Obama spokeswoman Lis Smith said.