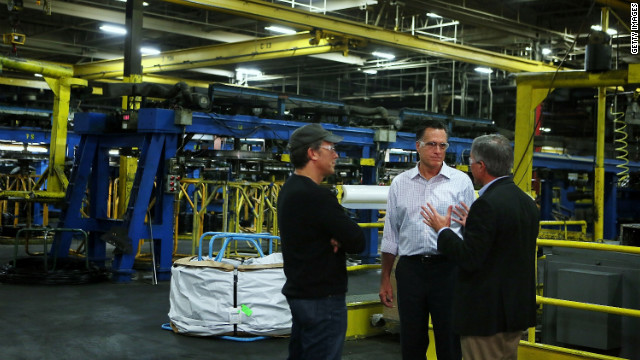 Romney held a roundtable discussion on manufacturing with business leaders at American Spring Wire's headquarters in Bedford Heights, Ohio as part of his campaign's three-day bus tour across the Buckeye State.

The same company, along with two steel wire companies from North Carolina and Tennessee, petitioned the government on May 27, 2009 to look into a trade issue, arguing that Chinese firms were selling steel wire products in the U.S. at less than normal value. On June 17, 2009, the Department of Commerce announced a decision to start investigating the problem.

A year later, the International Trade Administration, a division within the Commerce Department, announced it was ordering an "antidumping" duty on "prestressed concrete steel wire" strands from China. It also announced a countervailing duty, aimed to counter subsidized products coming from other countries.

As part of the order, U.S. Customs and Border Protection officers were instructed to suspend liquidation on the merchandise from China and "require cash deposits equal to the estimated amount by which the normal value exceeds the U.S. price," according to a Commerce statement issuing the order at the time.

The department regularly issues antidumping and countervailing duty orders on products being imported at unfair prices-a policy in place before Obama took office. Under his administration, more than 53 such orders have been issued, 39 of which have been against China.

Romney's campaign, however, argued the president "deserves no credit" for enforcing policies that have already been in place.

"President Obama deserves no credit for an agency enforcing pre-existing law on behalf of private parties bringing legitimate legal claims," campaign spokeswoman Amanda Henneberg said Wednesday in a statement. "The fact remains that President Obama does not have a comprehensive strategy to confront China's systematic violations of its trade obligations."

While aggressively courting Ohio voters in recent weeks, Romney has been railing against Obama for being weak against China. The Republican nominee particularly takes aim at the administration's decision not to label the country a "currency manipulator," a designation that would allow the United States to more directly confront China over actions that have cheapened Chinese exports, undercut the prices of American goods and produced economic growth rates for China several times that of the U.S.

While critics caution that such a label could ultimately trigger a trade war with China, Romney has released two negative ads on the issue and made it a main point of contrast while speaking at the steel wire company Wednesday.

"One of nations that has cheated over the years has been China. They've artificially held down the value of their currency and by doing that, their prices and their products are artificially low," he said. "Our guys go out of business, people lose jobs."

Romney vowed on his first day in office he would label the country a "currency manipulator."

"They must not steal jobs in an unfair way," he said.

Obama, meanwhile, has been trying to bolster his stance against China. Last week, the president announced his administration filed its ninth trade complaint against China with the World Trade Organization, claiming the country illegally subsidizes automotive exports and undercut American suppliers.

His campaign released a web video Wednesday, criticizing Romney for talking tough on China but not hesitating to make money off Chinese companies in the past.

"Romney invested in China's version of YouTube–a haven for stealing American videos," the narrator says in the 30-second video. "Romney's even invested in a Chinese electronics company being sued by Microsoft for pirating its software."

The video concludes: "If Romney really wanted China to stop stealing, why would he send them his money?"

The Romney campaign also responded to the web video Wednesday.

"Mitt Romney will not take hypocritical attacks from a President who promised to take China to the mat for its unfair trade practices and wound up being China's doormat, at the expense of American workers," Henneberg said.

- CNN's Jim Acosta and Dana Davidsen contributed to this report.