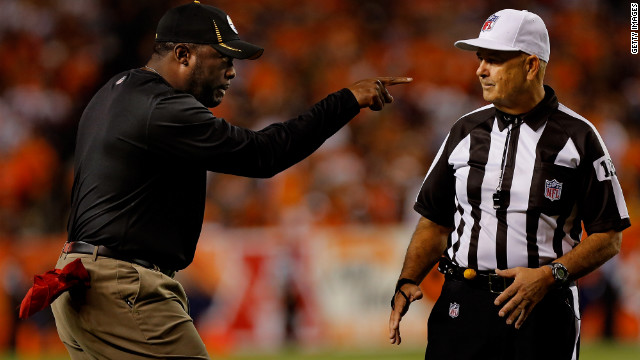 DEVELOPING: ALL EYES ON OHIO… Polls show Mitt Romney trailing President Barack Obama in just about every one of the swing states where the 2012 campaign is being waged. But Romney appears to be in deeper trouble in Ohio than elsewhere, an alarming development for Republicans who know that the candidate's White House chances begin and end with the kind of middle-class voters who reside in places such as Akron, Cincinnati and Zanesville. – Peter Hamby

- Obama: ‘I don’t see any victims, I see hardworking Ohioans’ -
PRESIDENT BARACK OBAMA AT A CAMPAIGN EVENT IN OHIO: “I don’t believe we can get very far with leaders who write off half the nation as a bunch of victims, who never take responsibility for their own lives, and I’ve got to tell you, as I travel around Ohio and as I look out on this crowd, I don’t see any victims. I see hard-working Ohioans.”

- Romney: ‘Talk is cheap’ -
MITT ROMNEY AT A CAMPAIGN EVENT IN OHIO: “A lot of people can talk. Talk is cheap. You can be extraordinarily eloquent and describe all the wonderful things you can do but when you cut through the words you can look at the record and when you can see policies that have not created the jobs America needs then you know it is time to choose a new leader, get a new coach, get America growing again.”

Do the math – with and without Ohio

TRAIL TRIVIA
(Answer below)
Who was Lt. Col. Peter Dewey and why should he be remembered on this day in history?

With so much public anger being directed at the NFL because of blown calls by replacement referees, we weren’t surprised that President Barack Obama weighed in on the issue.

After all, Obama is a self-professed jock and the labor impasse between NFL owners and disgruntled referees has gone well beyond rabid sports fanatics – even casual fans now are expressing outrage and their opinions on this matter. Even Mitt Romney and Paul Ryan have discussed the NFL impasse on the campaign trail.

“I'd sure like to see some experienced referees, with NFL experience, come back out to the NFL playing fields. … Paul was very angry that the Green Bay Packers, he believes, won, and the referees took it away from them,” Romney said in an interview Tuesday with CNN’s Jim Acosta.

And then Obama decided to offer his opinion in this high profile labor dispute, “I’ve been saying for months, we’ve gotta get our refs back,” Obama said on Tuesday.

He wasn’t lying. Obama did discuss the NFL referee dispute last week with an Ohio radio host. “Is it just me or do we have to get our regular refs back,” Obama said.

The president added, “I can’t get involved with it, but I’m just expressing my point of view as a sports fan,” he said.

But Obama went a step further by again discussing his hope for a deal to be struck in a message he posted Tuesday on Twitter: “NFL fans on both sides of the aisle hope the refs’ lockout is settled soon.” Obama signed the tweet bo – which means the president, not a staff member, wrote it.

But in a different, yet high profile dispute a few weeks back, Obama remained mum.

That is when the Chicago Teachers Union went on strike and locked horns with Chicago Mayor Rahm Emanuel, the president’s former chief of staff.

While proudly expressing his "point of view as a sports fan,” Obama never expressed his point view as a parent of two daughters who a few years ago attended Chicago schools - schools he represented in the state legislature and the U.S. Senate.

Obama’s Education Secretary Arne Duncan did weigh in on the teacher’s strike, but not the president.

Now, we realize it would not be politically smart for a Democratic president, seeking re-election, to get on the wrong side of a teacher’s union. And it's political candy to be on the side of football fans - especially in the outraged home state of the Green Bay Packers, the swing state of Wisconsin. But this appeared to be a big enough issue; one that involved both his adopted hometown of Chicago, as well as a former top aide.

Perhaps it was better the president didn’t weigh in as it might have complicated matters. A deal was eventually struck between the teachers and city officials.

Still, we found it interesting that Obama chose to talk publicly about the NFL labor impasse, but not the teachers strike until after it was resolved.

Leading CNNPolitics: China conundrum: Romney event site benefited from Obama trade action
Despite Mitt Romney's ongoing attack against President Barack Obama for not protecting American businesses against China, the Republican nominee held an event at a company Wednesday that may have benefited from an Obama administration trade action against the country. – Ashley Killough

Leading HuffPo: It Don't Mean A Thing, If You Ain't Got That Swing
A batch of new polls from two key battleground states produced some of the largest leads yet for President Barack Obama, drawing criticism from the campaign of Republican nominee Mitt Romney. In Ohio and Florida, the new surveys from The Washington Post and the polling partnership of CBS News, The New York Times and Quinnipiac University show Obama leading by margins approaching double-digits. – Mark Blumenthal

Leading Politico: 10 debate questions for President Obama and Mitt Romney
Barack Obama and Mitt Romney no doubt have it rough at the first presidential debate next Wednesday. But what about moderator Jim Lehrer? His job is to make two of the most scripted and steady debaters in politics break stride and make some news when they face off in Denver. – James Hohmann

Leading The New York Times: Polls Show Obama Is Widening His Lead in Ohio and Florida
For weeks, Republicans in Ohio have been watching with worry that the state’s vital 18 electoral votes were trending away from Mitt Romney. The anxiety has been similar in Florida, where Republicans are concerned that President Obama is gaining the upper hand in the fight for the state’s 29 electoral votes. – Jim Rutenberg and Jeff Zeleny

- Clinton links Benghazi attack with Al Qaeda -
SECRETARY OF STATE HILLARY CLINTON IN A UNITED NATIONS SPEECH: “Now, with a larger safe haven and increased freedom to maneuver, terrorists are seeking to extend their reach and their networks in multiple directions. … And they are working with other violent extremists to undermine the democratic transitions under way in North Africa, as we tragically saw in Benghazi.”

- As Egyptian president speaks at United Nations, Paul needles administration for aid to the country -
REP. PAUL RYAN AT A CAMPAIGN EVENT IN COLORADO: “Foreign aid should never be a blank check. These things come with strings and they need to. This is the debate we are having with Egypt right now. We have got to make sure that they are not taking our dollars and violating our own values. We have got to make sure that countries are respecting religious freedoms, women’s rights, individual rights, freedom of the press, honoring their treaty agreements. It is important to the war on terror that we have these relationships.”

- Top conservatives endorse Akin -
RICK SANTORUM AND SEN. JIM DEMINT IN A WRITTEN STATEMENT: “If Republicans are to win back the Senate and stop President Obama's liberal agenda, we must defeat Senator Claire McCaskill in Missouri. … Todd Akin is a principled conservative who is committed to winning and fighting for freedom in the U.S. Senate. … We support Todd Akin and hope freedom-loving Americans in Missouri and around the country will join us so we can save our country from fiscal collapse.”

- Eastwood swears they were there -
JIMMY FALLON JOKES ABOUT CLINT EASTWOOD ON HIS LATE NIGHT TALK SHOW: “I read that Clint Eastwood's new movie, "Trouble With the Curve" opened in third place this weekend after making only $12 million. Of course, when he saw the movie theater had so many empty seats, Eastwood was like, ‘look at these crowds. Queen Elizabeth. Ben Franklin. Yoda.’”

Ross Douthat (@DouthatNYT)
The basic GOP problem is that for politicians to experiment w/new messages/ideas, they need to feel they won't win w/o experimentation.

Ryan Teague Beckwith (@ryanbeckwith)
Romney-backing CEO on Clinton: "It kills me as a strong Republican saying it, but he was the most effective president during my lifetime."

Xaime A. (@xarabic)
US delegation boycotted Ahmadinejad speech at the #UN, Canadians walked out. #Iran http://ow.ly/e0IU0

Adam Vingan (@AdamVingan)
http://bit.ly/S1tdTX WSJ: Nats, O's broadcasters some of most biased in baseball according to "Announcer-Bias Index."

Lt. Col. Peter Dewey was the first American killed in the country that would become Vietnam when, on this day in 1945, he was shot by Viet Minh soldiers at a check point in Saigon. The OSS (an early version of the CIA) sent a group of seven soldiers into French Indochina to search for pilots who may have crashed during World War II. Dewey led that group.

In 1945, French Indochina was in the midst of a colonial struggle. The Viet Minh, a group of Vietnamese nationalists not interested in returning to colonial rule, had declared themselves the rightful leaders of the country even as the British and French were still posted there. Conflict broke out after a group of French soldiers tossed the Viet Minh out of their governing offices and started to assert control. Dewey was publicly supportive of the Vietnamese nationalists – so much so that the British requested he leave the country.

While headed to the airport in Saigon, the outspoken Dewey refused to stop at a checkpoint and instead just yelled, in French, at the Viet Minh soldiers to get out of the way. Assuming he was French, they opened fire on the car and killed Dewey.

While the Vietnam War did not start until 1955, Dewey is regarded as the first of almost 60,000 Americans killed in Vietnam, even though most U.S. casualties didn’t occur until the 1960s.