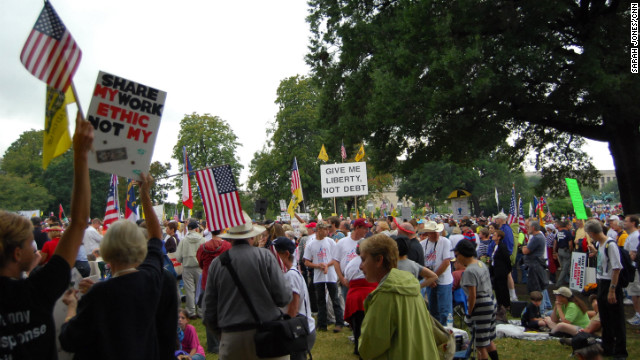 With an event Wednesday evening in Pittsburgh, FreedomWorks is launching its national "Black and White Tour," an explicit, unapologetic effort to lobby African-Americans on economic policy issues at the core of the agenda of many fiscal conservatives involved in tea party activism.

"Obviously, Deneen is black and I'm white," Kibbe explained. The conservative activist and thinker added that he sees issues of economic policy and economic freedom as relevant to everyone, including African-Americans who have been disproportionately affected by the struggling economy in recent years. "Our theme is that freedom is a black and white issue," Kibbe told CNN.

During the tour, discussion will focus on jobs and the economy, education policy and school choice, and energy policy including the Obama administration's push for green energy, Kibbe said.
"And we're also going to take on some of what we think is the divisive rhetoric coming from the left on race, some of the attacks on the tea party movement," Kibbe also said. "And really get to this idea that in our community and, we believe, in America, you shouldn't be judged based on the color of your skin, but [instead] on the content of your character. And that's what Dr. [Martin Luther] King [Jr.] taught us and we're afraid that we've gotten away from that."

Winning African-Americans over to the conservative grassroots movement that has been a foil to President Obama almost since his first day in office will not be an easy task.
A compilation of recent CNN/ORC International polling indicates that 95% of African-Americans support the president while just 3% support GOP challenger Mitt Romney. The same polling indicates that 67% of African-Americans identify as Democrats, 29% as independents, and just 5% as Republicans and 25% of blacks describe their political philosophy as liberal, 38% as moderate, and 32% as conservative.

He added, "We're thinking about the future. We don't consider this a one-time political event. It's really a social movement based on a set of values. And if you ignore youth, if you ignore some of the largest – the fastest growing demographics in this country, you're really not thinking strategically about where you need to be. But also it's just a basic principle. We want to be inclusive, we want to include everybody and we don't understand why our country would ever be divided along racial lines philosophically."

Progressive activist and former Obama administration adviser Van Jones said Kibbe and FreedomWorks would be better off first addressing elements within the Republican Party that are nativist and racially hostile to communities of color.

"The very premise of this tour is borderline insulting," Jones, who is African-American, said. "It's as if they think African-Americans don't know what the Republican Party stands for. But we have television; we know. It would be more effective for them to challenge some of those very unfriendly forces inside their own party before passing out invitations for new people to join."

The GOP "used to be the party of [Abraham] Lincoln," Jones added, "but over time it's allowed itself to be infested in too many places – but not everywhere – by individuals and groups that polling data shows are very hostile towards communities of color and immigrants. And no bus tour is going to cover that up or fix it. So I think that it's a strange thing for them to do."
Jones explained that he isn't saying FreedomWorks or the GOP as a whole is racially hostile. "I said they've allowed themselves in too many places to be infested with these folks and that's what's keeping people out of the Republican Party. . . . There are elements in their party, there are elements in their base that are offensive and noxious to vast majorities of people of color."

"The presumption must be that somehow this is just a failure to communicate," Jones added, "as opposed to there's some actual problems in their party that, if they addressed, would make their party more attractive."

Jones also made the point that King championed and the black middle class was built on many of the governmental anti-poverty programs that are now under "withering fire" by the conservative movement.

And responding to FreedomWorks' plan to focus on how African-Americans are doing economically, Jones said "It's very easy to capitalize on people who are hurting. It's harder to explain how the policies that they're promoting would make things better.

"I think that the African-American community is actually pretty sophisticated politically . . . and I think that [FreedomWorks] may go out to give an education about American politics but they may also get educated by a very well-informed and well-educated African-American community that has made a decision about what political party to be in."
After Wednesday's event in Pittsburgh, Kibbe and Borelli plan to take their "Black and White Tour" to Independence, Ohio on October 5.