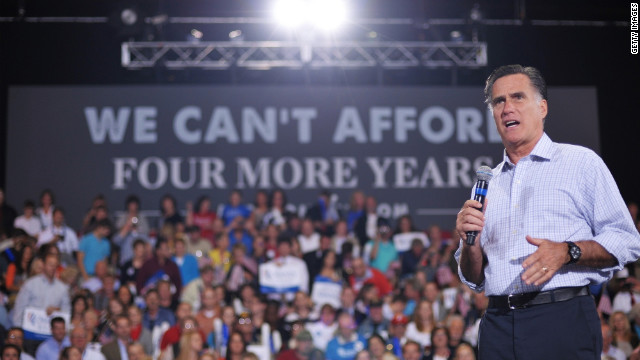 (CNN) – Republican presidential nominee Mitt Romney pointed Wednesday to the Massachusetts health reform law he signed – and particularly its coverage of children – when asked about his compassion for middle class people.

Romney raised the law in an interview with NBC News. Conservatives have criticized Romney for supporting the law, which is similar to the health reform law signed by President Barack Obama. Romney has said his law was constitutional and appropriate in Massachusetts, but was not meant to be implemented nationally.

"I think throughout this campaign as well, we talked about my record in Massachusetts, don't forget - I got everybody in my state insured," Romney told NBC News, according to a quote on their website. "One hundred percent of the kids in our state had health insurance.

"I don't think there's anything that shows more empathy and care about the people of this country than that kind of record," he continued.

Minutes later, however, Romney railed against Obama's health law, which bears similarities to the Massachusetts provision.

At a campaign rally in Toledo, Romney reaffirmed his commitment to "repeal Obamacare and replace it with real health care reform."

"Obamacare is really Exhibit No. 1 of the president's political philosophy, and that is that government knows better than people how to run your lives," he said.

Romney has largely avoided speaking about his Massachusetts health care plan on the campaign trail, since it served in part as a blueprint for Obama's sweeping health care reform, which Republicans oppose. Last week, Romney joked that Obama often jabs him as "the grandfather of Obamacare," saying "I don't think he meant that as a compliment but I'll take it."

Last month, Romney brought up the law when defending himself against accusations that he's waging a "war on women."

"Look, I'm the guy that was able to get health care for all of the women and men in my state," Romney said on Fox News. "They're just talking about it at the federal level. We actually did something, and we did it without cutting Medicare and without raising taxes."

At the rally Wednesday in Toledo, Ohio, Romney explained that "government has a role" in helping people.

"So we're going to help those that need our help, we're a compassionate people," he continued. "At the same time, at the same time, we're going to insist that these people have the opportunity for work if they can carry out work, if they're able-bodied. Because we are not going to create a society of dependence on government."