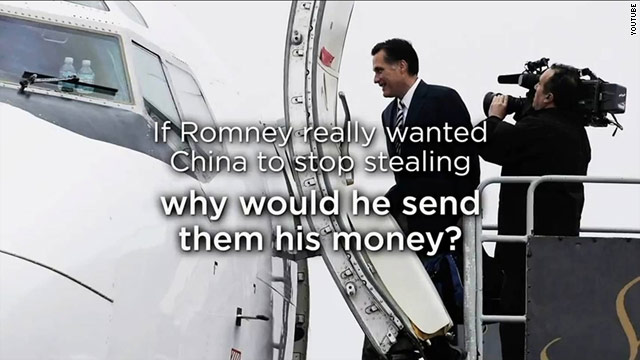 The narrator in the video says while the Republican candidate talks tough on China for "stealing American ideas and technology" on the campaign stump, in the past Romney did not hesitate to make money off Chinese companies.

"Romney invested in China's version of YouTube–a haven for stealing American videos," says the narrator in the 30-second video. "Romney's even invested in a Chinese electronics company being sued by Microsoft for pirating its software."

The video concludes: "If Romney really wanted China to stop stealing why would he send them his money?"

Romney, in turn, has attacked the president for failing to take a tougher stance on the country for questionable trade practices labeling China as a "currency manipulator" and promising to hit the country's exports to the United States with tariffs.

The Obama administration filed a trade complaint on September 17 with the World Trade Organization against China claiming the country has illegally subsidized automotive exports and undercut American suppliers.

The Romney campaign said the timing of the administration's filing the case proves campaign season political motivations calling the complaint "too little, too late."

"Mitt Romney will not take hypocritical attacks from a President who promised to take China to the mat for its unfair trade practices and wound up being China's doormat, at the expense of American workers," said Romney campaign spokeswoman Amanda Henneberg in response to the web video. "President Obama has refused to call China a currency manipulator, while the actions he touts have failed, expired, or been described as mere 'peanuts' by trade analysts. Only one candidate in this race will end China's cheating on trade and that's Mitt Romney."

Both candidates are campaigning in the crucial battleground state of Ohio Wednesday. A CNN Poll of Polls, an average of four Ohio polls of likely voters conducted over the last two weeks, shows Obama with an advantage over Romney 51%-44% among likely voters in the state.