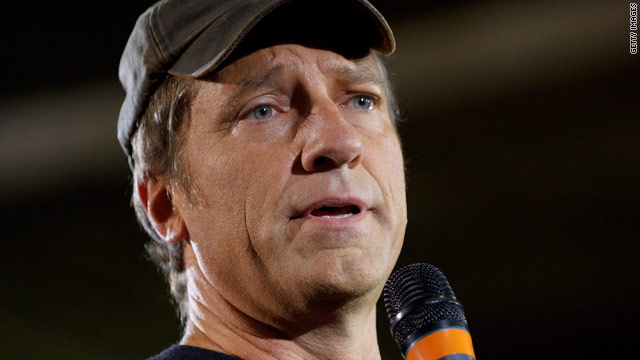 Romney gets down and 'Dirty' in Ohio

(CNN) – Campaigning in the battleground state of Ohio at same time as President Barack Obama, Republican presidential nominee Mitt Romney held a business discussion starring a man who has made a name for himself taking the jobs others don't want.

"Mike Rowe as you know is, well he is a guy that has made a name for himself by doing things other people don't want to do – really ugly, dirty jobs," Romney said. "Like standing with a politician, alright?"

Rowe's website describes him as the "brave host and apprentice" of the Discovery Network television show "Dirty Jobs." (You may have also seen him in those Ford commercials.)

Romney and Rowe sat onstage alongside a half dozen Ohio business owners and leaders in Bedford Heights talking jobs and manufacturing.

"He's non partisan, he's not here to endorse me, he's not here to add support to one campaign or another," Romney said of his guest. "He's here to talk about his ideas about how to help America create more jobs."

Rowe described the importance of "the men and women who do the kinds of jobs that make civilized life possible for the rest of us," and said he attended the event at the invitation of Romney.

Suggesting he was speaking of the costs of higher education, Rowe continued, "There's got to be a better way to be happy and successful in your career than simply assuming a massive amount of debt and exiting an educational program that gives you a degree without training."

Romney took questions and feedback from the business leaders joining him onstage and the audience.

He promised he would take a hard line against China over its currency manipulation. He said his response to the United States' losing its share of manufacturing jobs to other countries would be to adopt policies favorable to both manufacturing and as well as engineering and development.

Meanwhile, Obama was 130 miles away in Bowling Green, Ohio, and said Romney's rhetoric on China was disingenuous.

"He says he's gonna take the fight to them, he's going to go after these cheaters, and ive got to admit, that message is better than what he has actually done about this thing," Obama said. "It sounds better than talking about all the years he spent profiting from companies that sent our jobs to China.

"So when you hear this new-found outrage, when you see these ads he's running promising to get tough on china, it feels a lot like that fox saying we need more secure chicken coops," he continued.

Romney was campaigning in Cuyahoga County, also home to Cleveland, a county which went by a wide margin – 39 points in 2008, 34 points in 2004 – for the Democratic presidential candidate over the Republican.

At one point, a supporter in the audience said "we're going to deliver Cuyahoga County to you," and Romney replied, "I need it in a big way."

With only 41 days remaining before the election, and Ohio early voting beginning next week, Romney can be expected to campaign in Ohio again.

The GOP presidential candidate has so far made 19 previous trips to the Buckeye State. Rowe has made at least one, and that previous trip stuck in his mind.

On a job for his show, he spent "a very long day in the middle of July with the guys over at the Department of Transportation – specifically in their roadkill cleanup division," the host explained.

"The roadkill," in Ohio, he said, "is second to none, both in volume and variety."