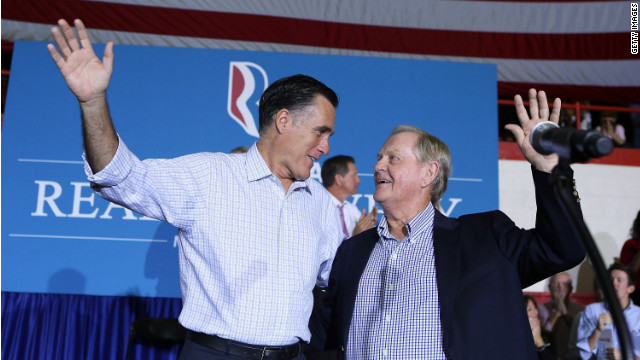 Romney 'my heart aches' for those struggling

Westerville, Ohio (CNN) - As he attempts to reverse a polling deficit against President Obama in Ohio, Mitt Romney had a message for that swing state's voters Wednesday: he feels their pain, and he knows how to fix it.

The GOP presidential candidate told 2,000 voters in a high school gym outside Columbus they could trust him to know his strengths – righting the economy, he said, as well as tackling the national debt.

"I've been across this country. My heart aches for the people I've seen," Romney told the enthusiastic supporters seated on folding chairs around a high school gym. "And the difference between me and President Obama is I know what to do and I will do what it takes to get this economy going."

Recognizing that many small business owners pay taxes on their business through their personal income filing, Romney aknowledged that his tax reforms would affect the personal income system.

"By the way don't be expecting any huge cut in taxes because I'm also going to lower deductions and exemptions," Romney said. "But by bringing rates down we'll be able to have small businesses keep more of their money so they can hire more people."

Though Romney lags behind Obama in a handful of recent polls taken in Ohio, polls from The Washington Post and Quinnipiac University showed voters here trust Romney more than the president to do a better job handling the budget deficit.

Romney's appearance here Wednesday came as part of a three-day joint bus tour with running mate Paul Ryan designed to shore up support for the Republican ticket in the last 40 days of the White House race.

Golf legend Jack Nicklaus delighted the audience with an appearance, and introduced Romney by saying the two men shared family values. In turn, Romney called Nicklaus "the greatest athlete of the 20th century."

"When he said this election is not about him, but about his kids and his grandkids I knew just what he felt, that's what this campaign is all about," Romney said.

He also ruefully joked with the audience about what he called one of his weaknesses – athleticism.

"When I got the job to help organize the Olympic Winter Games in 2002, I knew that it was a bit ironic for a guy with such little athletic ability as myself to be able to be responsible for the largest athletic event in the world," Romney joked. "My boys also saw the irony in it."