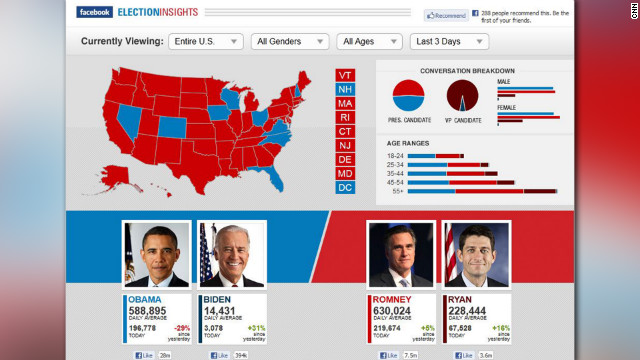 HE'S JUST NOT THAT INTO YOU: Akin: McCaskill more 'ladylike' in last election… Embattled Rep. Todd Akin, who on Tuesday repeated his decision to remain in Missouri's battle for U.S. Senate, said in an interview published Thursday that his opponent, Democratic incumbent Sen. Claire McCaskill, was more "ladylike" in her 2006 election than she is this time around. According to the Kansas City Star, Akin claimed McCaskill's demeanor at last week's debate indicated she was nervous about remaining in office. – Kevin Liptak

TRAIL TRIVIA
(Answer below)
What congressman is noted for saying, “And that's just the way it is"?

Elections have always been social. This year, that truism is being taken to a new level, with Facebook and social media sites mixing political propaganda seamlessly with personal posts of baby pictures and high school updates.

Today, the Pew Research Center published its biennial news consumption survey, which magnifies the growing importance of sites such as Facebook, which alone commands nearly a billion users worldwide.

As students of political messaging, we have been tracking the chatter on these social networks in real time, with the help of our exclusive partnership with Facebook. If you look at the map, http://www.cnn.com/FacebookInsights, you can see for yourself how the campaigns are breaking through in different states. What is fascinating is the current map shows that Mitt Romney is dominating the conversation in most of the United States and has for the past three days, but Barack Obama is the candidate with the most buzz in nine states – the very same nine states that CNN has labeled as swing states in our electoral map: Nevada, Colorado, Iowa, Wisconsin, Ohio, Virginia, North Carolina, New Hampshire and Florida.

With all the talk this cycle of Super PAC influence, it’s important to remember the free and viral nature of social media in spreading a message to the masses. Indeed, social media have a political power that is hard to match – and hard to predict (just see for yourself how much chatter is on your Facebook wall about the latest ad buy vs. the leaked Romney video about the 47%).

Leading CNNPolitics: What will it take for Romney to win?
Mitt Romney's gambit of running as the anti-Barack Obama could still work, Republican strategists say, if the presidential hopeful spends less time trying to define his opponent and more time spelling out how he would handle the job. – Halimah Abdullah

Leading Drudge: Obama Has My Vote, He Gave Me A Free Phone
Protester outside of Romney rally explains how Obama gives all minorities free phones and that is why they should vote for him. Cleveland Ohio, September 26, 2012.

Leading HuffPo: All In On '47 Percent'
President Barack Obama's reelection campaign is making sure that every last voter has heard Mitt Romney's 47 percent comments, releasing a new ad on Thursday that contrasts the GOP nominee's controversial words with images of Americans representing "the 47 percent" he spoke of. According to recent polling, the firestorm over Romney's remarks has already hurt his standing in swing states. – Sabrina Siddiqui

Leading Politico: Denver debate do-or-die for Romney
The kickoff presidential debate Wednesday in Denver is shaping up as do-or-die time for Mitt Romney, with the pressure intensifying this week after a flurry of swing-state polls showed President Barack Obama opening up a sizable lead. – Jonathan Martin and Maggie Haberman

Leading The New York Times: Election May Decide When Interrogation Amounts to Torture
Neither Barack Obama nor Mitt Romney has said much about torture as part of terror investigations during the 2012 general campaign. But the future of American government practices when interrogating high-level terrorism suspects appears likely to turn on the outcome of the presidential election. – Charlie Savage

- Obama’s ballot box question: Who is better for you? -
PRESIDENT BARACK OBAMA AT A CAMPAIGN EVENT IN VIRGINIA BEACH, VIRGINIA: “Today, I believe that as a nation we are moving forward again. We are not where we need to be. Not yet. We have got a lot more folks who have to get back to work. We have got a lot more work to do to make the middle class secure again. Now the question is who is better for you? I know some in the crowd may be a little biased but, I also want to speak to the audience who may be seeing this over the television.”

- Romney hits Obama on sequestration, pledges 12 mil. jobs -
MITT ROMNEY AT A CAMPAIGN EVENT IN SPRINGFIELD, VIRGINIA: “I am concerned about where America is headed. The White House proposes sequestration, kind of a gun to your head opportunity which is that Congress couldn't get the job done properly and the president couldn't lead them. Why, they'd make devastating cuts to our military. … I have five things I am going to do to get this economy going and they are going to create 12 million jobs. I am not going to be cutting jobs from Virginia; I am going to be adding jobs to Virginia.”

- Referencing the replacement refs makes any speech gold -
CONAN O’BRIEN ON HIS LATE NIGHT TALK SHOW: “Iranian President Mahmoud Ahmadinejad gave his speech at the U.N. today and he was actually applauded. Of course he started his speech with "these replacement refs suck!" and the crowd went crazy.”

Sam Youngman (@samyoungman)
Someone missed Sportscenter. Man asks Romney about NFL refs coming back. "I sure hope they do." - Romney

Vaughn Sterling CNN (@vplus)
Obama may be a job creator after all http://money.cnn.com/2012/09/27/news/economy/obama-job-creation/index.html … via @CNNMoney

Molly Ball (@mollyesque)
Jen Psaki, asked how badly Obama could do in debates: "Well, he could fall off the stage." Real quote.

While the phrase "And that's the way it is," was coined by Walter Cronkite and popularized by Tupac in the song "Changes," Rep. Ted Poe, R-Texas, is also known for using this catchphrase.

After almost all of his floor speeches, Poe concludes his remarks with the phrase, "And that's just the way it is."

The catchphrase has become so noteworthy that Poe's hometown paper, the Houston Chronicle, has prefaced coverage of Poe by asking readers, "Ready for another 'and-that’s-just-the-way-it-is' speech?"

Poe is not some irregular speaker on the House floor, either. Nearly every morning, Poe will speak about a range of topics such as immigration, health care and … pirates. And according to this report from The New York Times, as of last year, he had logged more speaking time on the House floor than any other member of Congress (as of March 2011).

That's a lot of "the way it is" speeches.

Though Steve Liguori (@SteveL3877) and Greg Dean (‏@gregdean11) – two regular Gut Check winners – both correctly answered today’s Gut Check trivia question, we give a shout out to a new participant who also got the right answer: Daniel Holt (@dholt3566). Congratulations to all.