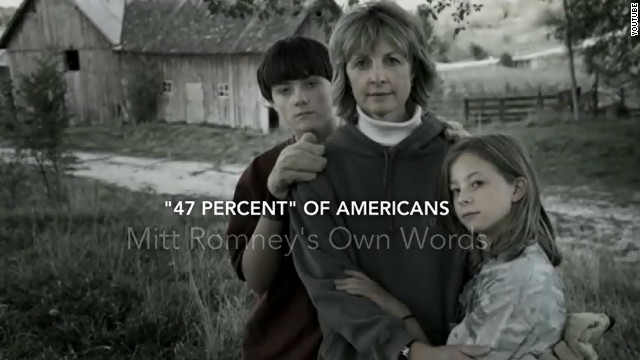 Obama's campaign says the 30-second commercial will air in New Hampshire, Virginia, Ohio, Iowa, Nevada and Colorado. It features Romney's comments, which were made at a fund-raiser in May but not revealed until last week, over pictures of working-class Americans.

Adding to his argument about entitlement, Romney said his "job is not to worry about those people. I'll never convince them they should take personal responsibility and care for their lives."

The spot is the second from Obama's campaign going after Romney for his secretly recorded comments. The first, which was released earlier this week, also used a narrator to hammer home the Obama team's message.

"Doesn't the President have to worry about everyone?" the narrator asked in the earlier spot.

Romney has defended his remarks, saying they were meant as political analysis rather than an expression of governing philosophy.

"What I'm talking about is a political process," Romney told ABC News Wednesday. "I don't expect to get 100% of the vote, I know I'm not going to get 100%, I hope to get 50 plus percent and make sure that I become the next president. That's what my campaign is focused on. Get those numbers so I could become president and help all the people in the country."