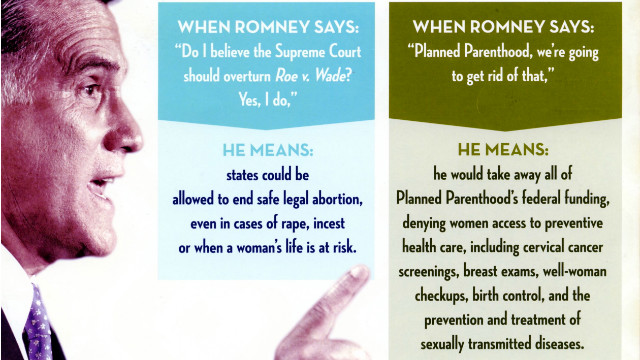 Washington (CNN) - Swing state television airwaves are already saturated with ads, and now - with early voting soon to be underway in several states - mailboxes are starting to fill up as well.

Voters in Virginia this week received a glossy mailer from Planned Parenthood Action Fund warning that Republican nominee Mitt Romney would "turn back the clock" for women if elected.

The two-sided mail piece portrays Romney inside a primitive 1950s-looking television set and highlights his proposal to eliminate federal funding for Planned Parenthood and his support for overturning Roe vs. Wade.

"Mitt Romney would go too far and interfere in a woman's personal medical decisions," reads the mailer, provided to CNN by a voter in the Richmond area who received it.

It's a potent message in Virginia, where a recent Washington Post poll showed President Obama holding a nearly 20-point advantage over Romney among women.

“More false and dishonest attacks from President Obama’s allies can’t hide his failed record," Henneberg said. "President Obama’s policies have made it more difficult for women to start businesses, keep more money in the bank, or see their children graduate with good jobs on the horizon."