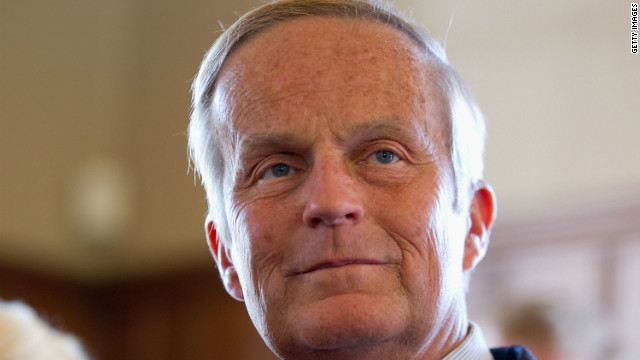 (CNN) - A consultant for Rep. Todd Akin likened the Senate candidate to David Koresh on Friday, saying Akin's ability to withstand GOP pressure to withdraw from the Missouri race was like the cult leader's resistance during the deadly 1993 standoff with federal authorities.

Consultant Kellyanne Conway said she has expressed her opinion to Akin "for a while now," adding Akin was successfully able to sustain the aftermath of his controversial rape comments last month.

"The first day or two where it was like the Waco with the David Koresh situation where they're trying to smoke him out with the SWAT teams and the helicopters and the bad Nancy Sinatra records. Then here comes day two and you realize the guy's not coming out of the bunker. Listen, Todd has shown his principle to the voters," Conway, CEO of The Polling Company, said a radio show hosted by Tony Perkins, president of the Family Research Council.

In a statement Friday evening, Conway clarified her remarks in the interview, saying she was referring to the tactics employed in an effort to push Akin out of the race, not comparing the two men.

"I would never compare Todd Akin to a cult leader, because there is none," she said in the statement. "It may have been in artful, but it was not what was intended."

Koresh led a 51-day stalemate between his armed religious group, The Branch Davidians, and agents with the Bureau of Alcohol, Tobacco and Firearms and the Federal Bureau of Investigation in Waco, Texas. It ended in a massive fire and the deaths of at least 76 people.

Last month, Akin faced several calls from top Republican leaders and groups to drop out of the Senate race against Democratic incumbent Sen. Claire McCaskill after he caused an uproar by saying women were biologically capable of blocking pregnancy in cases of "legitimate rape."

The Missouri congressman refused to end his campaign and reiterated his decision Tuesday, the final deadline to drop out of the race.

"A number of people have asked me if I'm dropping out," Akin said a press conference in St. Louis, adding that this is "not my decision," but rather the decision of Republican voters who chose him this summer as their Republican candidate.

Akin got the support of some conservative leaders this week, including South Carolina Sen. Jim DeMint and former Sen. Rick Santorum of Pennsylvania. Former Missouri Sen. Kit Bond announced he was backing Akin Friday, despite calling for Akin to drop out weeks earlier.

McCaskill's seat has long been considered a potential pick-up by the GOP as they seek to retake the Senate majority.

Conway's comments about Koresh come a day after Democrats pounced on Akin for telling a newspaper that his opponent, McCaskill, was not being "ladylike" in the campaign.

"I think we have a very clear path to victory, and apparently Claire McCaskill thinks we do, too, because she was very aggressive at the debate, which was quite different than it was when she ran against Jim Talent," Akin said. "She had a confidence and was much more ladylike [in 2006], but in the debate on Friday she came out swinging, and I think that's because she feels threatened."