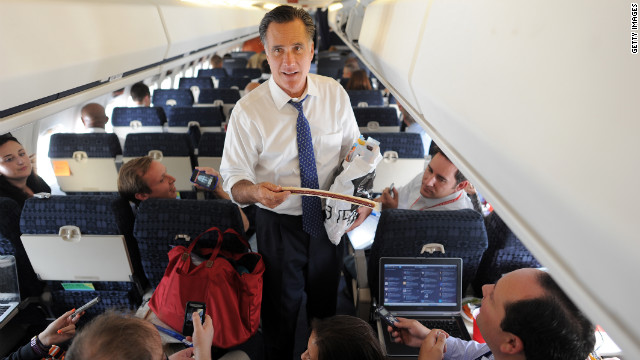 (CNN) - Republican presidential candidate Mitt Romney suggested Friday that the audience pay closer attention to what he says, rather than what he wears when he takes to the debate stage next week.

"I know that in debates there's always interest in the theatrics if you will and the one-liners, the jokes, and who wore what color tie and so forth," he said.

But blue or red, striped or solid, Romney said he is "looking forward to the debates" and hopes the audience will tune in with a critical ear.

"I think that despite all of the interest in those types of matters that the American people will listen carefully to the conversation that's held over three debates and the forth, with the vice presidential debate, and they'll decide who can help their family, who will be able to get our economy going in the way it could be going," he said, expressing his hope that "they'll make their decision based on what they believe is in the best interest of the country and their own family"

"I expect to be able to describe that in a way people will understand," Romney continued, "and if they do, I'll get elected."

Asked about the importance of the first debate - to be held next Wednesday - the GOP candidate said he "can't tell you how important it'll be" but predicted it would help voters "make a more informed choice."

Longtime Romney adviser Beth Myers sought to set expectations for the candidate's debate performance in a campaign memo obtained by CNN on Thursday, writing that the opponent - President Barack Obama - is "widely regarded as one of the most talented political communicators in modern history."

Obama will "use his ample rhetorical gifts and debating experience to one end: attacking Mitt Romney," Myers wrote. "We fully expect a 90-minute attack ad aimed at tearing down his opponent."

Romney also spoke by phone with Israeli Prime Minister Benjamin Netanyahu on Friday after attending a fundraiser and campaign rally in Pennsylvania. Romney told reporters aboard his plane that the two spoke about his assessment of where the red line ought to be drawn and my own views with regards to Iran."

Initially, Romney ignored questions about the debates and his call with Netanyahu, instead passing out beef jerky to the reporters aboard his charter flight.

"Guys. It's just - all we've got here is beef jerky," he joked after a reporter asked him a question about his earlier phone call with the Israeli prime minister. "That's all we've got."

Before turning more serious, a reporter suggested that the GOP candidate might bring some of the beef jerky onstage with him at the first debate in Denver.

- CNN's Rachel Streitfeld and Peter Hamby contributed to this report