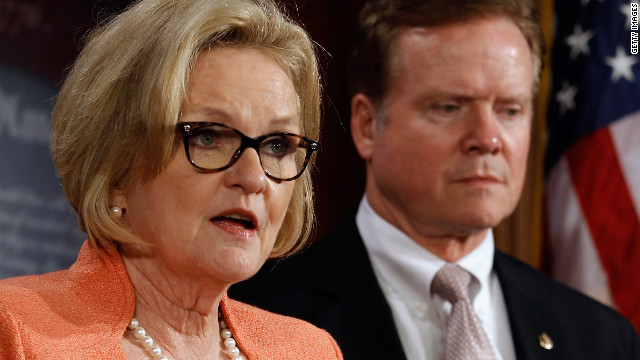 McCaskill: Akin so extreme, other conservative looks like a 'hippie'

(CNN) – Sen. Claire McCaskill fired back Friday at Rep. Todd Akin over his recent characterization of her as less "ladylike" in the pair’s current senatorial election than she was in her last, dismissing her Republican foe as an outlier even in right-wing circles.

"I was speechless," the senator said in an interview with MSNBC, referring to Akin’s latest comments. "I mean, this is somebody who does make Michele Bachmann look like a hippie. He is that far on the fringe."

Bachmann is a congresswoman from Minnesota and tea party favorite who ran for this year’s Republican presidential nomination.

McCaskill described Akin as being "very extreme" and said he was not ready for last Friday's debate.

"I don't think he was prepared for me confronting him with things like him being one of the handful of people to vote against the child nutrition program and voting against a sex offender registry and voting against a Center for Missing and Exploited Children," she said in the interview.

On Thursday, Akin spoke to reporters about the debate and race. The congressman said he is confident he will win, in part because he thinks McCaskill is nervous.

"I think we have a very clear path to victory, and apparently Claire McCaskill thinks we do, too, because she was very aggressive at the debate, which was quite different than it was when she ran against Jim Talent," he said, citing the GOP incumbent McCaskill defeated in 2006.

"She had a confidence and was much more ladylike, but in the debate on Friday she came out swinging, and I think that's because she feels threatened," Akin continued.

"I think that saying I was unladylike is a code word for that, you know, women shouldn't be strong and that we should be more deferential,” she said. “I think that's probably what he was getting at.”

A number of Republicans urged Akin to leave the race earlier this month after he made comments about "legitimate rape" – contending that doctors told him women’s bodies could somehow prevent unwanted pregnancies, for which he later apologized. But the congressman didn’t back down, expressing his determination to stay in the race and win the seat.

Earlier on Friday, Kellyanne Conway - a consultant for Akin - compared the candidate's resilience to cult leader David Koresh's standoff with federal authorities in 1993. Akin was able to brave the aftermath of the controversial rape comments, and show his resilience in the process, Conway said on a radio show hosted by Family Research Council president Tony Perkins.

- CNN's Kevin Liptak and Ashley Killough contributed to this report.