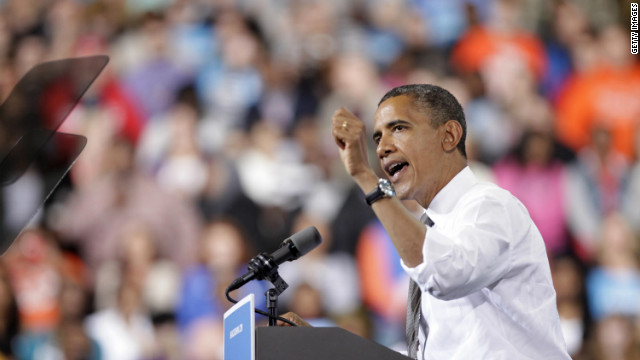 (CNN) - President Barack Obama wasted little time recently adding a new element to his stump speech which makes Mitt Romney the victim of his own comments.

At a fund-raiser in Florida last spring, Romney said that that 47% of people pay no federal income taxes, are dependent on government, and view themselves as victims - and will support Obama regardless of the arguments Romney makes about lowering taxes.

His comments were secretly recorded and posted on a left-leaning website last Monday and Tuesday.

Romney said his words were "off the cuff" and "not elegantly stated," but Obama proceeded to use them against him.

A spokeswoman for Romney, Amanda Henneberg, commented to CNN on this report, saying "This election presents a clear choice between the government dependency of Barack Obama and Mitt Romney’s vision of economic freedom."

Obama debuted a form of the line at a town hall-style meeting for the Univision television network three days after the video was first released.

"When you express an attitude that half the country considers itself victims, that somehow they want to be dependent on government, my thinking is maybe you haven't gotten around a lot, because I travel around the country all the time and the American people are the hardest working there are," Obama said to applause from the audience, which consisted primarily of supporters.

"Their problem is not that they're not working hard enough, or they don't want to work, or they're being taxed too little, or they just want to loaf around and gather government checks. We've gone through a challenging time," he continued. "People want a hand up, not a handout."

That was on Thursday. The Obama campaign went on to turn the comments into campaign ads, and meanwhile, Obama was refining the line he would use at campaign rallies.

The next day, Obama used the "47%" sentiment in his remarks at the AARP convention, though he did not mention the word "victim."

"But when it comes to gridlock, look - I came in in 2008 and I said, even though I got 53% of the vote and 47% of the country voted against me, that I'd be the President for everybody, and I'd listen to everybody's voices," Obama said, referring to a theme he spoke on after his election.

Later on Friday, the president rolled out a version of his victim line which has become standard fare in his stump speeches since then.

"I don't believe we can get very far with leaders who write off half the nation as a bunch of victims who think that they're not interested in taking responsibility for their own lives," he said in Woodbridge, Virginia. "I don't see a lot of victims in this crowd today. I see hard-working Virginians."

Since the Woodbridge event, his language has remained generally similar - citing students, moms, and senior citizens.

Obama used the comment again on Friday at a fundraiser in Washington - "when I travel this country I don't meet victims" - though he dropped any geographic reference, perhaps a victim to speaking inside the beltway.