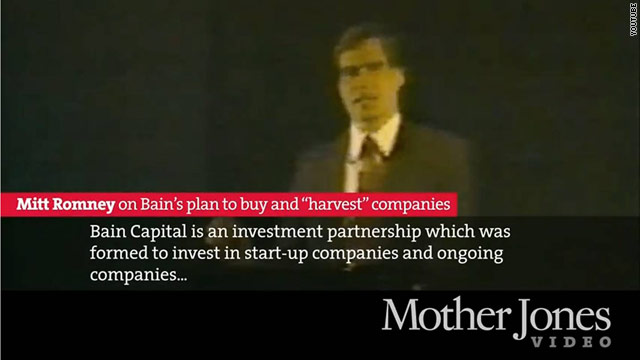 (CNN) – The left-leaning publication that posted the secretly-recorded videos of Mitt Romney that included his controversial "47%" comments is online with a new, older video where the GOP candidate describes a mission to "harvest" small businesses while at Bain Capital, the private equity firm he founded.

Mother Jones posted video taken in 1985 of Romney describing how the his firm was formed and the company's goal to buy stakes in start-up businesses, manage them for between five and eight years and then "harvest them at a significant profit."

"Bain Capital is an investment partnership which was formed to invest in startup companies and on-going companies, then to take an active hand in managing them and hopefully, five to eight years later, to harvest them at a significant profit," said Romney in the video posted to Mother Jones' website Thursday.

While campaigning, Romney has touted jobs created as a result of his time as founder and CEO of Bain Capital, buying and managing various smaller companies. The latest video, however, suggests a different objective for the companies-a means to generate profit.

Mother Jones said the latest video was part of a CD-ROM compiled in 1998 celebrating the 25th anniversary of Bain & Company, the parent company to Romney's private equity firm.

Mother Jones posted the first video earlier this month, which showed Romney speaking candidly to a group of top-dollar donors at a private fund-raiser in May about the "47%" of Americans he said who would automatically vote for President Barack Obama because they are dependent on government and consider themselves "victims," among other controversial comments.

Democrats took off with Romney's "47%" comments using the footage in political ads to criticize the Republican presidential hopeful for writing off nearly half of the American population.

Romney responded to the criticism saying that he cares for "100%" of Americans and admitted his remarks were "not elegantly stated," though ultimately defending the crux of his argument.

"We have a very different approach – the president and I – between a government-dominated society and a society driven by free people pursuing their dreams," Romney said at a press conference with reporters after the secretly recorded fund-raiser videos were posted.

The Romney campaign responded to the latest video asserting that Romney's tenure with the company helped save jobs at struggling companies.

"In addition to starting new businesses, Mitt Romney helped build Bain Capital by turning around broken companies, creating and saving thousands of jobs. The problem today is that President Obama hasn't been able to turn around our economy in the same way," said Romney campaign spokeswoman Amanda Henneberg.

In May, Obama also took Romney to task for his time at Bain Capital saying his Republican opponent's experience in the private sector does anything but qualify him for the White House.

"When you're president, as opposed to the head of a private equity firm, then your job is not simply to maximize profits. Your job is to figure out how everybody in the country has a fair shot," the president said during a press conference at the NATO summit in Chicago.