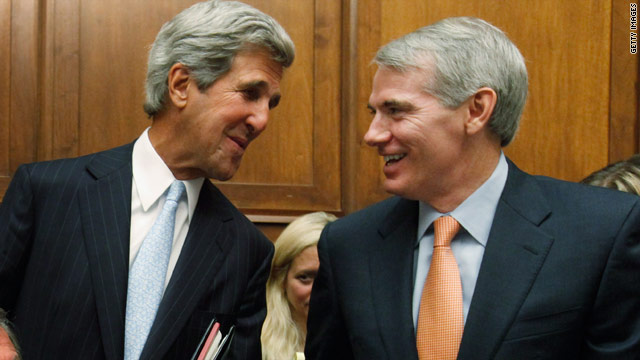 Getting ready for Wednesday's showdown

(CNN) – Massachusetts Sen. John Kerry, who's playing the role of Republican presidential nominee Mitt Romney in President Barack Obama's debate preparations, will join the president in Nevada this week, according to an Obama re-election campaign official.

The president travels to Nevada on Sunday, where he'll hold an evening rally. Obama will stay in Nevada to prepare for the debates before flying to Denver on Wednesday for the first debate.

The Romney campaign tells CNN that Sen. Rob Portman of Ohio, who's playing the role of Obama in Romney's debate preparations, will travel with the former Massachusetts governor on Monday to Colorado. Romney will hold a rally in Colorado that night before final debate preparations.

Romney's running mate - Rep. Paul Ryan - will debate Vice President Joe Biden on October 11, and a campaign aide said Saturday that Ryan will focus on debate preparations a few days next week while in Virginia. He is expected to be in the Old Dominion State on Wednesday, Thursday, and possibly on Friday.

His last mock debate - with legal scholar Ted Olson - was in Janesville, Wisconsin on September 23.