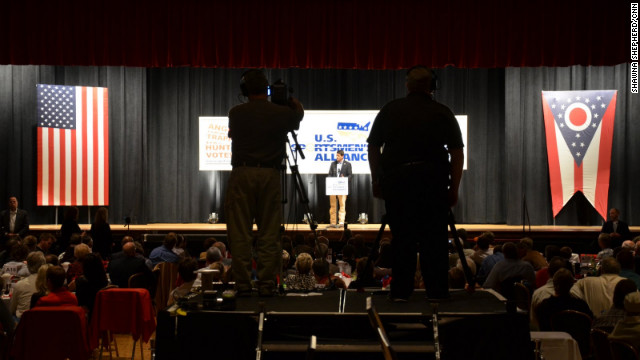 Columbus, Ohio (CNN) - With 12 days to go until the only debate between the vice presidential candidates, Rep. Paul Ryan and Joe Biden have stepped up their attacks about one another on the campaign trail.

After Biden made the charge that Mitt Romney’s economic plan could hit seniors with more taxes to their Social Security benefits, the next day Ryan, the Republican vice presidential nominee came to his running mate’s defense.

"Just down in Florida yesterday, Vice President Biden was making up all new falsehoods about Social Security and taxes. They’re trying to scare people for political gain. That’s unfortunately the kind of campaign that we’re seeing, as I said with a president without a record to run on,” Ryan said in Columbus.

The Democratic vice president was campaigning in Florida on Friday when he said, "The beneficiaries, who will be getting in the future, will be getting considerably less in Social Security payment.”

The Romney campaign rebutted Biden’s claims with a blog post on Friday, but Romney’s running mate responded directly to the attack at a campaign event on Saturday evening.

“Let me be very clear: There is only one person in this race threatening the health and retirement security programs of our seniors and that is President Obama,” said Ryan, before he leveled criticism directly at his upcoming debate opponent.

“In fact, Joe Biden himself voted to raise taxes on social security benefits, and as a senator, President Obama voted to keep those tax increases in place three times. I want to be very clear about this: Mitt Romney and I will never waver in our commitment to our seniors. Our plans actually save these programs,” he said.

The Romney campaign used the same argument in the blog post, pointing to Biden’s record when he was serving Delaware in the U.S. Senate and “voted for higher taxes on Social Security benefits for seniors making as little as $34,000 per year.”

Wisconsin native Ryan, who has served 14 years in the House of Representatives, reiterated the Romney-Ryan plan preserves entitlement programs.

“Our plans actually save these programs, they make no changes for people in or near retirement, they strengthen Medicare and Social Security for a generation,” Ryan said.

The vice presidential hopeful continued, “And shame on the politician who wants to use this issue to try and scare seniors when those of us who are out there trying to fix this problem for my generation and my kids’ generation and your kids.”

The Romney blog post assures that the Romney-Ryan plan to “preserve and strengthen Social Security does not raise taxes on anyone.”

They argue Obama’s plan “is to do nothing and simply wait for the exhaustion of the Social Security trust fund to happen. “

“The Social Security Trustees have concluded that doing nothing – the President’s plan – will mean that seniors will see their Social Security benefits cut by 25% in 2033.”