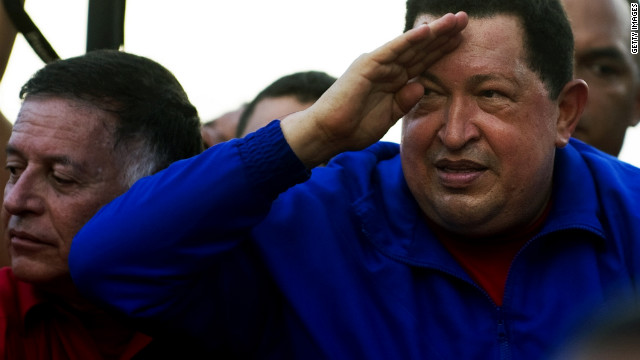 The leftist leader and strong man, who has used strong anti-United States language in his political rallies and official speeches, told state-owned VTV, "In the point of view of his politics, if I were voting, I would vote for Obama and I believe that if Obama was from Caracas, he would vote for Chavez, I am positive."

"Obama is a good guy," continued the Venezuelan president, who has led his country since 1999 but is facing his strongest challenge in years.

Chavez became well known for using strong anti-American rhetoric against former President George W. Bush, whom he called a "devil" and also referred to as a drunk.

Things seemed to be changing in 2009, when Chavez and Obama met during the Summit of the Americas. The two leaders shook hands and Chavez presented Obama with the book "Open Veins of Latin America: Five Centuries of the Pillage of a Continent."

Chavez spoke highly of a newly elected Obama during a rambling speech at the U.N. General Assembly, calling Obama an "intelligent man" and compared him to President John F. Kennedy.

Since then, however, Chavez has largely backed off his kinder approach to the American president, calling Obama a "great disappointment" in an interview with CNN en Español's Juan Carlos Lopez in 2010.

The issue of Venezuela arose on the campaign trail in July, when the president told a local Miami television station that Chavez has had little impact on the U.S. of late, but the South American country requires continued attention particularly when it comes to Iranian influence.

"We're always concerned about Iran engaging in destabilizing activity around the globe," Obama said. "But overall my sense is that what Mr. Chavez has done over the last several years has not had a serious national security impact on us.

"We have to be vigilant," he continued. "My main concern when it comes to Venezuela is having the Venezuelan people have a voice in their affairs, and that you end up ultimately having fair and free elections, which we don't always see."

Romney called the comments "stunning and shocking," writing "as president, I will speak clearly and resolutely on the challenges we face so that both our allies and our adversaries will know where we stand."

Latino voters, who are particularly concerned about Chavez's rule of Venezuela, make up a voting bloc seen as crucial this year.

CNN's Marilia Brocchetto and Kevin Liptak contributed to this report.