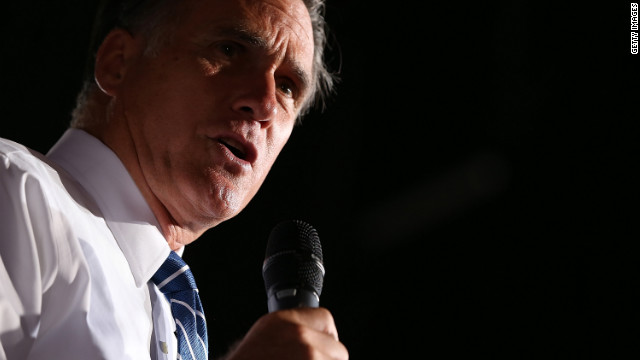 Romney: Debates aren't about a win

Denver (CNN) - As Mitt Romney headed into the crunch period of debate preparation with a heavy weight of expectations on his shoulders, he told a sprawling Denver audience that the Wednesday night match-up against President Barack Obama wasn't about a scoring a win.

"People want to know who's going to win - who's going to score the punches and who's going to make the biggest difference in the arguments they make," Romney said. "You know, in my view, it's not so much winning and losing or even the people themselves - the president and myself - it's about something bigger than that."

Instead, Romney said, the trio of presidential debates offered an opportunity for each candidate to present his own pathway for America.

Earlier in the day, a Romney adviser sought to downplay expectations for the first debate after Romney surrogate and New Jersey Gov. Chris Christie predicted Romney would turn the race "upside down" at the Wednesday-night face-off.

"I don't think any one event is going to dramatically alter the race," Kevin Madden told reporters on Romney's campaign charter.

On Monday evening in Denver, Romney offered a possible preview of his attack lines against the president on foreign policy.

"For the last four years, we've had a foreign policy led by a president who believes the strength of his personality is going to get people to do the right things," Romney said. "Well, we've seen fires burning in U.S. embassies around the world. We need the strength of American military, America's economy and America's principles if we're going to keep this world more safe and preserve liberty."

Romney also criticized Obama for the congressionally-mandated military cuts that are scheduled to kick in at the beginning of 2013.

"His budget calls for hundreds of millions of dollars in military cuts, and then on top of that was this sequestration deal that puts even more cuts on top of that," Romney said. "That will mean thousands of jobs lost here. It will mean millions of jobs ultimately lost across our great nation."