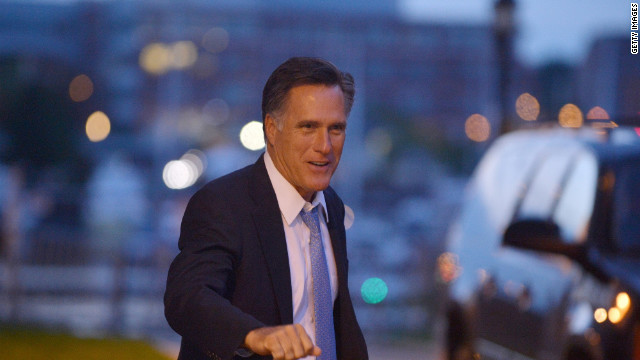 (CNN) - President Barack Obama's handling of events in the Middle East, including last month's attack on an American consulate in Libya, was the focus of a scathing op-ed from his challenger Mitt Romney Monday, and will continue to be a focus of his campaign's message, according to advisers to the GOP nominee.

The op-ed, which recycles much of what Romney has said on the stump and in interviews, asserts Obama has been weak in promoting American interests as various events unfold in the Middle East, including in Libya, Egypt, Syria and Iran. Romney has latched onto a comment Obama made during an interview in September calling incidents of unrest in the region "bumps in the road," saying it reflected a dangerous nonchalance toward serious issues of national security.

"These developments are not, as President Obama says, mere 'bumps in the road,'" Romney writes in the op-ed, published in the Wall Street Journal. "They are major issues that put our security at risk."

In a "60 Minutes" interview that aired last week, Obama said unrest in Libya would not prevent the country from developing a functioning government that adequately represents the Libyan people.

In the op-ed published Monday, Romney wrote Obama had placed the United States "at the mercy of events rather than shaping them."

"We're not moving them in a direction that protects our people or our allies. And that's dangerous," Romney continues. "If the Middle East descends into chaos, if Iran moves toward nuclear breakout, or if Israel's security is compromised, America could be pulled into the maelstrom."

In his article, Romney did not specifically address questions about security at the American consulate in Benghazi, Libya, ahead of the September 11 attack, which resulted in the deaths of four Americans, including the ambassador to Libya. But surrogates for Romney, including Sen. John McCain, have hammered the White House for what they said was a grave mishandling of events both before and after the attack.

"It was either willful ignorance or abysmal intelligence to think that people come to spontaneous demonstrations with heavy weapons, mortars, and the attack goes on for hours," the Republican senator told CNN chief political correspondent Candy Crowley on "State of the Union" Sunday.

He argued the administration's first reading of the events in Libya had "certain political overtones."

And the conservative super PAC American Crossroads, co-founded by Karl Rove, released a video Monday harshly criticizing Obama for his response to the attacks, including not scheduling any meetings with foreign leaders during last week's United Nations General Assembly.

"President Obama needs to learn that being president isn't just about being on TV and protecting your job, it's about leadership," a narrator in the video says.

On a conference call Monday, Romney senior adviser Kevin Madden said foreign policy would form part of the GOP candidate's message for the closing month of the presidential campaign, along with the economic points Romney has been hammering away at for the better part of a year.

"Gov. Romney will, over the next few weeks, crystallize the choice for voters on the issue of foreign policy and national security," Madden said, adding that Romney would "lay out a stronger vision for American foreign policy based on the strong leadership that we need to shape world events and protect American interests and ideals."