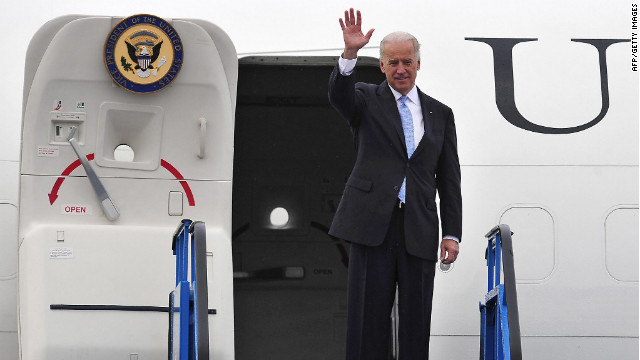 Washington (CNN) - For the second time on Tuesday, the aircraft carrying Vice President Joe Biden was forced to abort its original plan for landing.

Late evening, Air Force Two intended to land at Andrews Air Force Base after Biden spent the day campaigning in North Carolina. But heavy fog over parts of Washington forced the plane to circle skies over Washington for a while - then divert.

"Due to a low ceiling and visibility below approach minimums, Air Force Two was re-directed to land at Dulles International Airport on the way back from Asheville, North Carolina," a White House official said.

The plane landed without incident some 45 minutes after its intended landing time. In addition to the vice president, others on board included administration officials, members of the military and the traveling press.

The White House official said that Biden would take a motorcade from Dulles to his home at the U.S. Naval Observatory.

After Biden de-planed, he jokingly told reporters, "This will teach you guys to come along with me on a trip. Good luck getting home."

Earlier Tuesday, en route to the first of two campaign events in North Carolina, Air Force Two was forced to abort its initial landing, creating a rough ride and passenger uncertainty over when the plane would land.

After a safe landing, Biden joked at the earlier Charlotte campaign event that the incident had caused "queasy stomachs" for those on board.