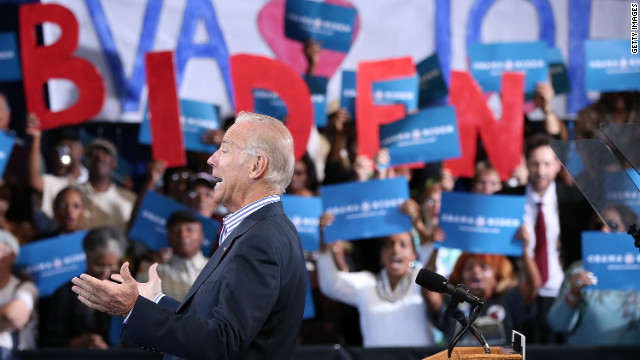 BREAKING ON CNN: MITT ROMNEY’S PRE-DEBATE ROUTINE INCLUDES WRITING “DAD” ON A PIECE OF PAPER AT THE PODIUM IN HOMAGE TO HIS FATHER, GEORGE ROMNEY …

In an exclusive interview with CNN’s Gloria Borger, ANN ROMNEY says: "As soon as he gets on stage, the first thing he does - actually, there's - there are a few first things he does. He takes off his watch and puts it on the podium. But then he writes "Dad" on the piece of paper. And that's amazing, because he loves his dad, respects his dad. Doesn't want to do anything that would not make his father proud. And just a reminder that, 'Yes, I'm here, but Dad, I love and respect who you are, what you've taught me, what kind of a person you are, and I'm going to honor that.' And so I love the fact that Mitt does that. So he writes that. And then he looks in the audience and he finds me. He has to find where I am. And - he just - he needs just that connection. And almost after every answer that he gives, he'll find me in the audience, to see, 'Was that good? Was that OK?'"

BREAKING: FIRST LADY MICHELLE OBAMA TELLS CNN’S JESSICA YELLIN, “I GET SO NERVOUS”... In an interview set to kick off CNN’s pre-debate coverage at 7 p.m. Wednesday, Michelle Obama compares herself to a mother of an Olympic competitor:

Michelle Obama: “I get so nervous at these debates and, you know, I am like one of those parents watching their kid on the balance beam, standing there, trying not to, you know, have any expression at all.” Asked if she critiques the president, the first lady says she generally gives only positive reinforcement “because he is a great speaker. You know, he is good at this.”

GREAT NUGGET: CNN’s Jim Acosta reports… “When President Obama and Mitt Romney face each other at their first debate Wednesday, it will only be the fourth time the two men have ever seen each other in person.”

TRAIL TRIVIA
(Answer below)
Ronald Reagan, at age 26, made his debut in a leading role on this day in 1937. What was the name of the film?

Ron Brownstein’s column in the National Journal today caught our eye. As loyal readers know, we are fascinated by the political bases, voting blocs and demographic groups, particularly this election cycle, women voters.

Brownstein, a CNN contributor, is an expert on political demographics, and he points out that on the eve of the presidential debates, Obama’s strength in the swing states not only has to do with his “coalition of the ascendant” (aka growing population groups such as minorities), but also a demographic group once firmly placed in the conservative camp: white women without a college education.

Brownstein writes. “Obama’s gains with these so-called ‘waitress moms’ are especially pronounced in heartland battlegrounds like Iowa, Ohio, and Wisconsin. … Democrats say blue-collar women have been the principal, and most receptive, target for their extended ad barrage portraying Romney as a plutocrat who is blind, if not indifferent, to the struggles of average families.

“‘Advertising matters, and a lot of the advertising is aimed at that group,’ said Democratic pollster Geoff Garin, who is advising the pro-Obama super PAC Priorities USA. ‘That’s certainly been our No. 1 priority.’”

As we count down to Wednesday’s debate, we are watching how both campaigns reach these socially conservative women who are being challenged by the tough economic climate. One can easily connect the dots to the long-standing interview requests that each campaign granted to CNN for pre-debate interviews with Michelle Obama and Ann Romney, two women who speak to this demographic – and often do it more effectively than their spouses.

Leading CNNPolitics: Candidate 'tells' a cue to presidential debate performance
When Mitt Romney is agitated his arms flail. President Barack Obama has a tendency to drone on and on. Debate experts say both should keep those quirks in check during the upcoming presidential debates. Both candidates are considered skilled debaters - Romney's campaign called Obama a "universally acclaimed public speaker," and Romney was lauded for his performance during the Republican presidential primary debates. However, there's a lot more to effective debating than clever rhetoric. – Halimah Abdullah

Leading Drudge:‘It’s A Drag’
President Obama played some hookey from his intense debate preparation early this week in Las Vegas, visiting a campaign field office in nearby Henderson and chatting with volunteers for his re-election effort. "It's very nice. Although basically they're keeping me indoors all the time. It's a drag. They're making me do my homework," Obama joked with volunteer Andrea Stinger. – Justin Sink from The Hill

Leading HuffPo: Tough To Swallow
Republican presidential nominee Mitt Romney has a prescription for controlling soaring costs within the $2.8 trillion U.S. healthcare system, partly by making consumers pay more of their own medical bills. Romney's vow to repeal and replace President Barack Obama's healthcare overhaul has played prominently in the campaign, even as Romney has offered few details about his alternative. – David Morgan from Reuters

Leading Politico: Joe Biden: Sex symbol?
He’s No. 2 on the ticket, but No. 1 in their hearts. Women born before the Baby Boom generation seem to have a collective crush on a handsome vice presidential candidate with piercing blue eyes and a wide smile who likes to talk about government benefits for seniors. No, not Paul Ryan. Joe Biden’s bringing sexy back. – Jonathan Allen

INTRIGUING OPINION: CNN Contributor and GOP consultant Alex Castellanos writes that President Barack Obama is the ultimate undecided voter… “He was the man who supported ‘pay-as-you-go budgeting.’ Yet more U.S. debt was created during his administration than in any previous one. He boasts George W. Bush issued more regulations than his administration. He also accuses Bush of deregulation. He says he supports American energy independence. He withdraws oil and gas leases on public lands, cancels lease sales and establishes new obstacles to energy production. He spurns earmarks. He signs a bill with thousands of them. …Wednesday, two men debate for the Oval Office. The election is undecided. So, all too often, is the mercurial president who is asking for another term.”

- Biden says middle class has ‘been buried the last four years’ -
VICE PRESIDENT JOE BIDEN AT A CAMPAIGN EVENT IN CHARLOTTE, NORTH CAROLINA: “The Romney-Ryan tax plan will raise taxes on middle class families with a child, one or more children, by an additional $2,000 a year. … I mean we can stop all that malarkey. Look guys, think of it - this is deadly earnest man. This is deadly earnest. How they can justify, how they can justify raising taxes on the middle class that’s been buried the last four years. How in Lord’s name can they justify raising their taxes with these tax cuts?”

Gut Check Full Service: The Obama campaign’s efforts to clean it up…
Obama campaign official at 3:30 p.m. ET: “As the vice president has been saying all year and again in his remarks today, the middle class was punished by the failed Bush policies that crashed our economy - and a vote for Mitt Romney and Paul Ryan is a return to those failed policies. With more than five million private-sector jobs created since 2010, the vice president and President Obama will continue to help the middle class recover and move the nation forward.”
Biden at another campaign rally in North Carolina at 4:34 p.m. ET: “The middle class was buried by the polices of Romney and that Ryan supported, as Bill Clinton said all they're suggesting now when he's asked about this and he's the best- he made the comment- he said- what they're proposing is Bush economic policies on steroids- that’s what this is. But folks the middle class is coming back. It's coming back like Americans always do.”

- Romney would honor Obama’s illegal immigration permits -
MITT ROMNEY IN AN INTERVIEW WITH THE DENVER POST: “The people who have received the special visa that the president has put in place, which is a two-year visa, should expect that the visa would continue to be valid. I'm not going to take something that they've purchased. Before those visas have expired, we will have the full immigration reform plan that I've proposed.” LINK

- Portman reveals how he learned to play Obama for Romney debate prep -
SEN. ROB PORTMAN (R-OHIO) IN AN EXCLUSIVE INTERVIEW WITH CNN’S DANA BASH: “You have to figure out how they will express themselves. What the body language is going to be like. Try to imitate the person but give a fair presentation to whoever you are working with in terms of what they are likely to do.”
More of the exclusive interview with Portman will play at 7 p.m. ET tomorrow as part of CNN’s “Debate Night in America” coverage.

- Warren campaign goes after Brown over Scalia comment in debate -
MINDY MYERS, ELIZABETH WARREN’S CAMPAIGN MANAGER, IN AN E-MAIL TO SUPPORTERS: “Scalia: the same judge who said he was “adamantly opposed” to Roe v. Wade. Who opposes equal protection for women. Who even opposes the right to contraception. Yes, that Antonin Scalia. … If the Supreme Court was filled with a majority of Antonin Scalias, our country could move in a terrifying direction for all of us.”

Ken Thomas (@AP_Ken_Thomas)
#Obama on debate prep: "They're keeping me indoors all the time. It's a drag. They're making me do my homework."

#Obama on debate prep: "They're keeping me indoors all the time. It's a drag. They're making me do my homework."

Steve Brusk (@stevebruskCNN)
Romney hit a Chipotle in Denver for lunch with Sen. Portman. Asked if he was ready for tomorrow, Romney said, ""I'm getting there,"

Peter Hamby (@PeterHambyCNN)
Romney finance chairs told donors today: It's all good, we got this > http://bit.ly/VlaqrJ

Byron York (@ByronYork)
Paul Ryan to @IngrahamAngle: 'They have more money for TV…They're even outspending us three-to-one in Ohio.' Republicans ask: Huh?

MATT DRUDGE (@DRUDGE)
Curious tape dropping tonight. NOT from MOTHERJONES. Will cause controversy, ignite accusations of racism - in both directions!

Playing Andy McCaine, a crime reporter for a local radio station, Ronald Reagan made his debut as a leading man in “Love Is on the Air.” Reagan’s character was an intrepid journalist whose deep exposes get him in trouble with gangster Nicey Ferguson.

Earlier in 1937, Reagan has signed a seven-year contract with Warner Bros. By 1939, Reagan had already appeared in 19 films because of the frequency his unit put out films.

Other movies in Reagan’s filmography include “Knute Rockne, All American,” where Reagan played George “The Gipper” Gipp. It is from this movie that Reagan obtained the nickname the Gipper. Additionally, Reagan starred in “Kings Row,” “Santa Fe Trail” and “Cattle Queen of Montana.”

Reagan went on to become the president of the Screen Actors Guild in 1947, met his second wife, Nancy Davis, also a Hollywood star, in 1950 and earned a star on the Hollywood Walk of Fame in 1960.

Congratulations to birthday girl Marlena Baldacci (@MarlenaCNN) for correctly answering today’s Gut Check Trivia question. Kudos to Doug Heye (@DougHeye), who quickly came close, but incorrectly said the movie was “Love is in the Air” when it was actually “Love is on the Air.” Close one Mr. Heye. Gut Check wanted to give you a shout out anyway.