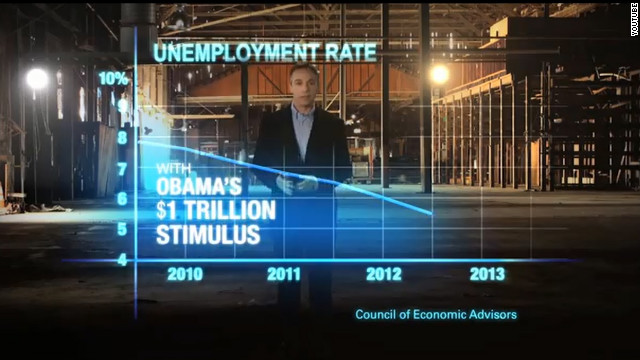 Crossroads makes its largest ad buy of the season

In the presidential ad, which the group said would begin airing Tuesday, a man stands with a chart showing jobs losses since Obama took office.

"This is what President Obama promised the jobless rate would be if we passed the stimulus: 5.6%. But this is what the jobless rate actually is: 8.1%. The difference? About 3.7 million jobs," the narrator says. "Obama's spending drove us 5 trillion deeper in debt, and now we have fewer jobs than when he started."

The ad, called "Actually Happened," concludes: "What Obama promised, versus what he delivered."

The group said the spot would air in eight battlegrounds: Colorado, Florida, Iowa, North Carolina, New Hampshire, Nevada, Ohio and Virginia. All are considered “toss ups” on CNN’s Electoral Map. Wisconsin is the only “toss up” state where the ad is not running.

Danny Kanner, an Obama campaign spokesman, wrote in a statement the new ad "ignores reality - businesses have created nearly 5.1 million new jobs over the past 30 months, and we've cut our deficit by $1 trillion, which is part of the President's balanced plan to reduce it by more than $4 trillion."