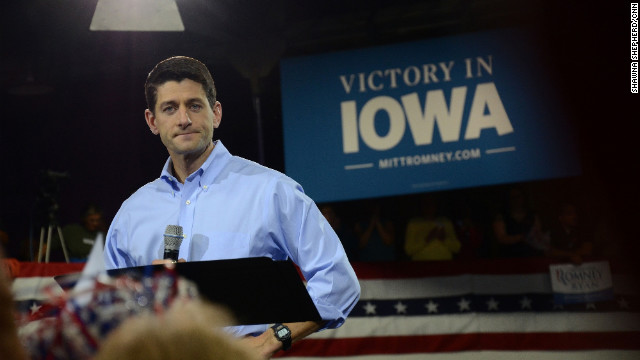 Clinton, Iowa (CNN) – Paul Ryan will continue to hone in on the "choice phase" of the campaign when he makes several stops in Iowa while Mitt Romney, his Republican running mate, prepares for Wednesday night's debate against President Barack Obama.

On Tuesday, with family in tow, Ryan will hold a town hall in Clinton, the hometown of his wife Janna's mother. They will also visit Muscatine and Burlington, along the eastern edge of the battleground state. Despite suffering from a head cold, the Wisconsin lawmaker and vice presidential nominee held a spirited rally in Dubuque on Monday.

"The choice is clear. And here is what we are doing. We are entering the debate phase, the choice phase of this campaign, and this choice is ever so clear," he said at an evening rally at Loras College, a Catholic liberal arts school his grandfather attended.

As he described the differences between the two candidates, Ryan charged Obama of raising taxes through his signature health care legislation known as Obamacare.

"What about taxes? You may not even know this but President Obama has already raised taxes 21 times. He is promising that if he is re-elected, he will raise taxes another $2 trillion dollars," Ryan said, citing a report by the House Ways and Means Committee.

Ryan's campaign stops come after an interview Sunday where Ryan said the campaign, at times, has not clearly presented a choice to voters.

In the same interview he acknowledged the Republican campaign's "missteps" by pointing Romney's now-notorious "47%" comments, which he admits was "inarticulate" but continues to defend the crux of his running mate's argument.

"We've had some missteps, but the end of the day, the choice is really clear, and we're giving people a very clear choice," he added.

Ryan has been taking the media to task for what he considers bias against conservatives. With just 36 days until Election Day, Ryan provided a rationale for the use of his time on the campaign trail at a fund-raising breakfast in New York City.

"And no offense to some in the media but they're not going to amplify our message so we have to go straight and communicate to voters," Ryan told 45 donors on Monday. "That's why you know I prefer doing town hall meetings now instead of just rallies. That's why we spend more of our time on regional TV, on Cincinnati news, on Dayton news, on Jacksonville news, on Miami News."