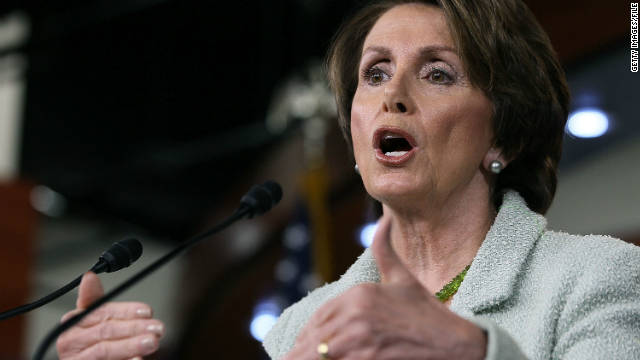 With Congress in recess for the campaign season, Pelosi argued on CNN's "The Situation Room with Wolf Blitzer" that if the GOP wants to look into the Libya issue, they should return for votes on other pending legislation, as well.

"We're supposed to be in session this week, but they've canceled it rather than passing a middle income tax cut, passing a jobs bill, passing the Violence Against Women Act, passing the farm bill–any of those things," Pelosi said. "But yet they have time to say we want information, when they know it's premature."

Asked if she was suggesting the hearing was called for political purposes, Pelosi replied: "One might suspect that."

Earlier Tuesday, GOP Reps. Darrell Issa and Jason Chaffetz sent a letter to Secretary of State Hillary Clinton, demanding answers to questions about the violence in Libya that killed the U.S. ambassador and three other Americans. The congressmen argued the State Department had ample warning signs and could have prevented the tragedy using heightened security.

Issa is chairman of the House Oversight and Government Reform committee, and Chaffetz oversees the national security subcommittee. Chaffetz is also a top surrogate for the Romney campaign.

Pelosi, however, argued it was too soon to demand conclusive answers, as investigations in Benghazi are still under way.

She added House Republicans had shot down "$300 million" in funds for the State Department, including "funding for security."

Pressed on whether she was implying the U.S. didn't have enough money to protect American diplomats in Libya, Pelosi said, "No."

"What I'm saying in Congress has the right of oversight, but it also has the power of the purse," she said. "Nobody's going to know by next week, but we have to have a full investigation and accountability for it but we also have to look to ourselves in terms of that funding question."

- CNN's Deirdre Walsh and Gregory Wallace contributed to this report.