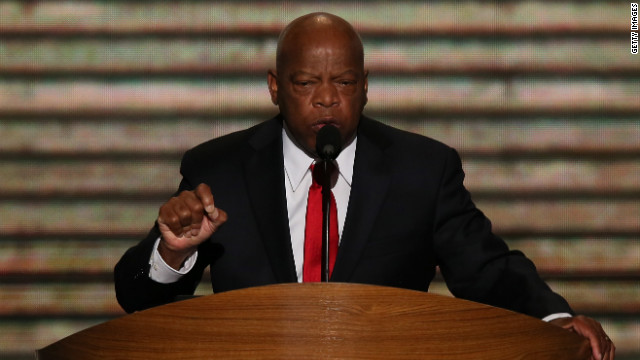 Lewis, wrote that there is a "deliberate and systematic effort on the part of Republican officials to prevent minorities, seniors, the young, and the poor from casting their ballots."

The Georgia Democrat sent the email on behalf of Patrick Murphy who is challenging Rep. Allen West of Florida.

He wrote that the matter is "deeply personal."

During the civil rights movement, he protested segregation by organizing lunch counter sit-ins, participating in "freedom rides" aboard segregated busses, leading other demonstrations, such as protest on a Selma, Alabama bridge which came to be known as "Bloody Sunday." His biography says he was arrested over 40 times while demonstrating.

At the Democratic National Convention this summer, he spoke passionately about the right to vote.

"My dear friends, your vote is precious, almost sacred," Lewis said. "It is the most powerful nonviolent tool we have to create a more perfect union."

In the fundraising email, he said of the Florida Republicans, "we can't let them steal this election."

"We must do everything we can to protect the vote," he continued.

Earlier this year, Florida election officials - led by Republican Gov. Rick Scott - began removing ineligible voters from their rolls. The Justice Department sued the state over the plans as the state sued the federal government for access to a database which they said would assist their plans to remove non-citizens from voter lists. In July, the state announced a deal which would allow them access to the list, which was maintained by the Homeland Security Department.

West has landed headlines of his own for a series of controversial comments, including his allegation that several members of Congress are members of the Communist Party and a separate charge that a Muslim member of Congress represents "the antithesis of the principles upon which this country was established."