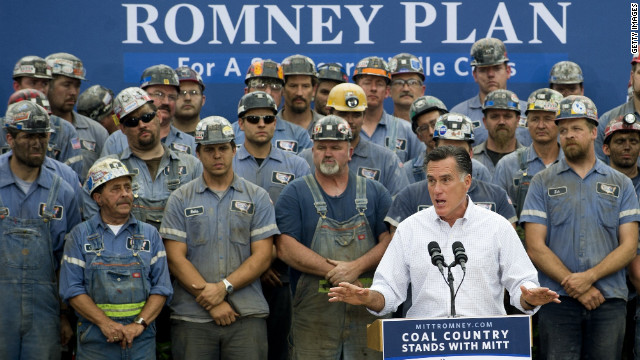 (CNN) – The latest salvo in the battle for coal country is an ad from President Barack Obama's campaign, which accuses Mitt Romney of using miners as "props" at a campaign rally that was subsequently used in a television commercial.

"See the coal miners in these ads?" a narrator asks. "They were told that attendance at Mitt Romney's rally was 'mandatory.' Their mine was closed and they lost pay they needed. All to be props in Romney's commercial."

Text at the end of the ad drives home the point: "Mitt Romney: Not one of us."

The commercial in question uses footage from an August rally Romney held at the Century Mine in Ohio, which is owned by Murray Energy. In the spot, he's pictured standing in front of miners questioning the president's record on energy.

The workers in the spot later complained to a local radio host that they were forced to attend the rally and weren't paid for the time they spent standing behind Romney.

"Those are baseless claims and accusations that are intended to silence Murray Corporation from speaking out against the Obama administration," Moore said, adding that the mine was shut down on the day of Romney's visit for safety reasons.

The Obama ad is the latest in a series of spots targeting workers in Ohio's coal country. Two coal-focused Romney campaign ads released two weeks ago aired in the Charleston, West Virginia, media market, which includes part of southern Ohio, and the Wheeling, West Virginia, – Steubenville, Ohio, market, according to CMAG.

Those two ads featured coal miners venting frustration at Obama's policies, which one said are "attacking my livelihood."

Ohio is a key battleground in November's election. A poll released Wednesday showed Obama with an eight point lead over Romney, 51%-43%. A CNN Poll of Polls which averages three recent surveys in the Buckeye State indicates Obama at 52% and Romney at 43%.