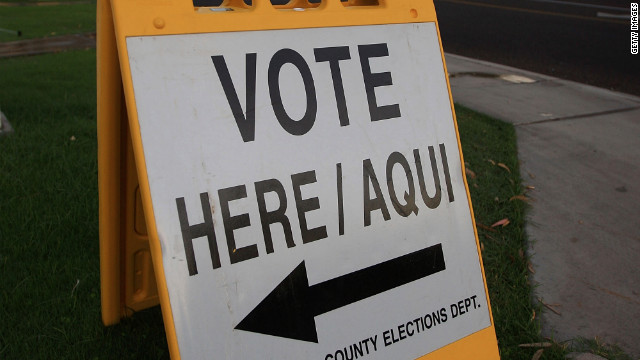 (CNN) - A new CNN/ORC International poll released Wednesday finds that Latinos are more optimistic about the economy than non-Latino whites, but six in ten see the economy in poor shape.

The poll finds 61% of Latinos say the economy is in poor shape, while 39% say it is in good shape. The views are generally negative but more optimistic than the views of non-Latino whites, who split 79% to 21% poor shape over good shape, according to the results of a CNN/ORC International poll conducted between September 28 and 30.

The majority of Latinos - 56% - believe the government should be promoting traditional values, while 41% say it should not. As to whether government is doing too much which should be left to individuals and businesses, 42% said yes and 54% said no. Among Latinos registered to vote, the split was even at 48%.

Latino voters are considered an especially important demographic in the 2012 campaign and are being courted by both sides. A CNN/ORC poll released Tuesday showed President Barack Obama with a significant lead over GOP challenger Mitt Romney among Latino likely voters.

Although six in ten see the economy in poor shape, Latinos appear to be increasingly optimistic that they will achieve the American dream. The difference between data from this survey and a 2010 survey used in comparison overlap within the polls' sampling errors.

The 2010 CNN sample found 45% believed they could reach the American Dream, while that number stands at 54% today.

The survey included 601 Latino adults reached by telephone between September 25 and October 1. It has a sampling error of plus or minus 4 points.