(CNN) - The founder of Restore Our Future, a super PAC supportive of Mitt Romney, said Thursday the group saw money pour in one day after the GOP nominee pulled a widely applauded performance in the first presidential debate.

"I think that today will probably be the best fund-raising day we've had, if not one of the top two fund-raising days we've ever had," Charlie Spies said on CNN's Erin Burnett "OutFront."
END_OF_DOCUMENT_TOKEN_TO_BE_REPLACED

Romney on 47% comments: I was 'completely wrong'

(CNN) - Mitt Romney said he was "completely wrong" when he argued that nearly half of Americans were "victims" and dependent on government.

The admission came Thursday as the GOP presidential candidate sought to clarify his controversial "47%" comments.
END_OF_DOCUMENT_TOKEN_TO_BE_REPLACED 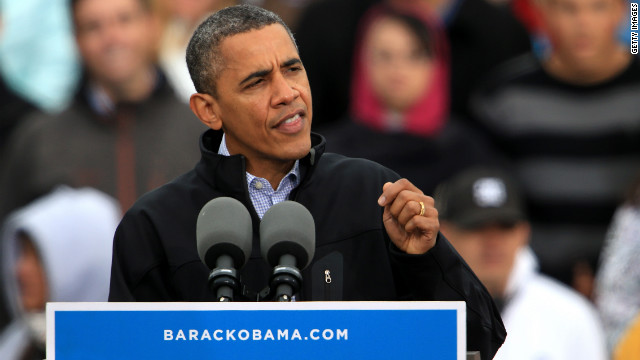 Washington (CNN) - The Obama re-election team raised more money last month than any campaign has brought in this election cycle, a Democratic source familiar with the fund-raising totals confirmed to CNN.

The campaign's September total is expected to exceed $150 million, the source said.
END_OF_DOCUMENT_TOKEN_TO_BE_REPLACED 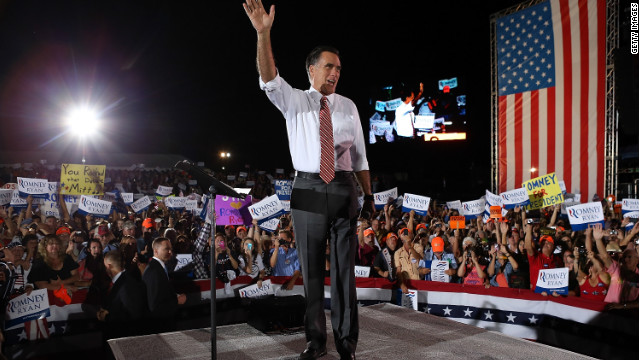 With Ryan by his side, Romney rallies Virginians in debate victory lap

Fishersville, Virginia (CNN) - As favorable reviews of his debate performance continued rolling in, Mitt Romney sought to capitalize on the momentum from his first head-to-head match-up against President Obama at an energetic rally Thursday night in Virginia.

The GOP presidential nominee had a busy night: He reconnected with his running mate Paul Ryan, accepted the endorsement of the National Rifle Association and declared his day brightened by a pre-speech concert by country star Trace Adkins - all at a rollicking outdoor rally attended by more than 6,000 supporters in western Virginia's Shenandoah Valley.
END_OF_DOCUMENT_TOKEN_TO_BE_REPLACED

(CNN) - Two days before Election Day on November 6, a movie detailing the raid that killed Osama bin Laden will air on the National Geographic Channel, the cable network announced Thursday.

The film is being distributed by the Weinstein Company, owned by a Harvey Weinstein, a major backer of President Barack Obama's re-election campaign.
END_OF_DOCUMENT_TOKEN_TO_BE_REPLACED

(CNN) - Eric Fehrnstrom, a top aide to Mitt Romney, suggested in a Thursday interview with CNN that the GOP presidential candidate's health plan may achieve his goal of covering individuals with pre-existing conditions through "state initiatives and money."

Asked at Wednesday's debate what he would put in place of President Barack Obama's health care law, Romney offered two particular provisions: "Number one, pre-existing conditions are covered under my plan. Number two, young people are able to stay on their family plan."
END_OF_DOCUMENT_TOKEN_TO_BE_REPLACED

Editor's note: Jessica Yellin is CNN's chief White House correspondent, based in the network's Washington bureau. She was named to the position in June 2011. Yellin contributes to CNN's America's Choice 2012 election coverage, reporting on President Barack Obama's administration and his re-election campaign.

Denver (CNN) - President Barack Obama turned in a less-than-stellar performance Wednesday night in his first debate this election season. On Thursday, his campaign aides said former Massachusetts Gov. Mitt Romney came armed with distortions. But if the president believed that, he barely brought them to the viewers' attention during the debate. Instead, he turned in a distracted, passionless performance.

Here are five reasons he fumbled:

(CNN) - Sen. Bernie Sanders of Vermont, an independent who caucuses with Democrats, had some biting criticism for President Barack Obama's debate performance, saying Thursday that the president took a "disastrous" approach in his match-up against Mitt Romney.

(CNN) - The committee tasked with electing Republicans to the Senate sent an email to supporters Thursday, praising Mitt Romney's debate performance and asking for donations to help the GOP nominee continue the "momentum."

The boost comes two weeks after some Republican Senate candidates openly criticized their own party's nominee over Romney's controversial "47%" comments, where he described nearly half of Americans as "victims" dependent on the government because they don't pay federal income taxes.
END_OF_DOCUMENT_TOKEN_TO_BE_REPLACED

(FORTUNE) - In Wednesday's presidential debate, Mitt Romney said President Obama was both the banking industry's make out partner and grim reaper. It just depends who you are.

In a response to a question about regulation, Romney said Dodd-Frank, the set of banking reforms that Obama pushed for and Congress passed in the wake of financial crisis, was an example of a law that's hurting the economy. Romney said that by specifying certain banks as Too Big to Fail, the government has given "the biggest kiss to New York banks I've ever seen." As a result, Romney said that's making it tough for smaller banks to compete.