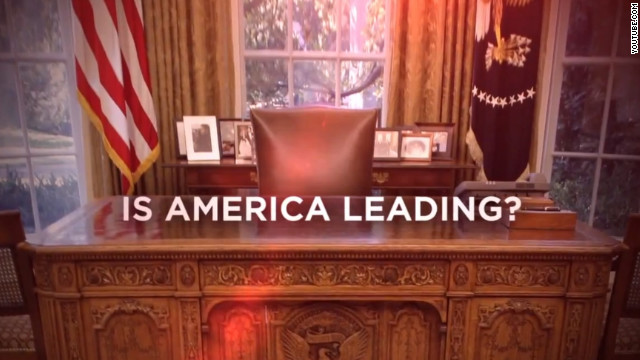 (CNN) - The Oval Office sits empty while violence erupts in the Arab world in a new ad from the conservative group American Future Fund.

The ad cites reports that President Barack Obama has missed a significant number of his daily national security briefings. The White House spokesman disputed those reports after they were published in September - the distinction being in-person briefings versus the written presidential daily briefing.

"President Obama skips 50% of his national security briefings," the narrator says. "September 11, 2012: Our ambassador is murdered, U.S. embassies under attack."

The president, the ad says, skipped his national security briefing the next day to "attend a fundraiser in Vegas."

The questions about the president missing intelligence briefings were raised by Republicans shortly after foreign policy success was a theme at the Democratic National Convention.

The ad also shows footage of Obama on ABC's "The View," then Israeli Prime Minister Benjamin Netanyahu, while the narrator says Obama was "too busy to meet with our closest ally in the region."

Sources told CNN in September that the White House turned down a meeting request when Obama and Netanyahu were in New York for the United Nations General Assembly meeting last week. The White House also disputed those reports.

"He gets it every day, okay? The President of the United States gets the presidential daily briefing every day," Carney told reporters on September 10. "There is a document that he reads every day when he is not - well, he always reads it every day because he's a voracious consumer of all of his briefing materials. And when he is physically here, most days he has a meeting in his office, the Oval one with participants in his national security team."

Iowa, with six electoral votes, is one of the nine toss up states on the CNN Electoral Map, while Minnesota is one of 14 states rated as safely in Obama's column.

In a statement announcing the ad buy, AFF Founder Nick Ryan said that Obama's "disregard for our national security is alarming."

"Not only are Americans asking if we can afford four more years of his crippling tax and spend policies – now they are wondering 'are we safe?'" he said. "It's time for real leadership at home and abroad."